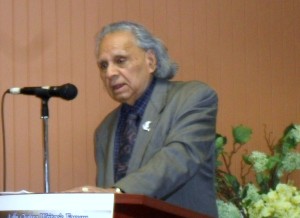 “Stephen Gill, self-exiled poet and novelist who writes mostly about peace, was born in Sialkot, now in Pakistan. When India was divided in 1947, his parents moved to New Delhi, the capital of India, to be in a safer area. The family never saw good days after the division of India. Remorseless brutalities on both sides of the border hardened the hearts of both the Hindus and Muslims, resulting in an intense atmosphere also for Christians. Stephen Gill began to find ways to run away from the murderous religious rage to grow as a creative writer in a fearless atmosphere. He says it was a miracle to receive a teacher’s position in Ethiopia. After teaching for three years, he migrated to England before settling in Canada in the early sixties.

In Canada, he kept finding ways to deepen the field of his writing that had been his passion all his life. He began to realize that careful revisions shape a good literature.

He has authored now more than twenty books, including novels, literary criticism, and collections of poems and his poetry and prose have appeared in more than one thousand publications. He writes mostly in English. Once in a while, he writes poetry in Urdu, Hindi and Panjabi languages. He has also written and published book reviews and research papers on writers. Some of his Urdu/Hindi poems have been sung with music by prominent singers of Pakistan and India in three albums. Twelve critical studies have been edited and released on his works and more are being  edited to be released shortly.

He has received recognitions, including The Queen’s Golden Jubilee Medal from Canada; and Empowered Peace Poet Award from World Poetry Canada, headquartered in British Columbia. Stephen Gill, Poet Laureate of Ansted University and an Adjunct Professor of EAU, has appeared in prestigious national and international reference books. Indira Kala Sangit University (IKSU) officially established the Centre for Stephen Gill Studies on April 21, 2012 in an impressive gathering of intellectuals. The gathering was chaired by the Vice Chancellor, Professor Dr. Mandvi Singh. She called it a historical move of the university to establish this centre for scholars to pursue their higher studies on Stephen Gill.

He has been a judge for poetry competitions, and evaluates dissertations of English Literature for doctoral students of universities in India to buy food to feed his passion. He has been the subject of numerous literary essays, books and doctoral studies. He is also honorary editor/advisor to several publications, and has edited publications. Stephen Gill is former president of Vesta Publications Ltd.; the Canadian Authors Association (the Cornwall, Ont. Branch); a national vice president of the World Federalists of Canada; the Multicultural Council of Stormont and Dundas; chief delegate to represent the World University for Canada; the Christian Cultural Association of South Asians,  Cochair of Downtown Improvement Business Area (DBIA) of Cornwall, Ont. Canada; and a director of the Children’s Aid Society of the United Counties of SD&G (Canada).

Stephen Gill has not said much about his early life, because that is to reincarnate the silent wrenching pains, he says. He however has painted some gruesome realities of these silent wrenching pains in the prefaces of his collections of poems, including Songs Before Shrine, and Shrine as well as in the introduction to his modern epic on terrorism The Flame. He has touched those gruesome realities also in his interviews and depicted here and there in his novel The Coexistence. It is the bitterness of the water of the early life that runs in the arteries of Stephen Gill’s writings. That bitterness in different forms often emerge in his dreams even now. He does not want to see that bitterness happening again in his life.

A self-exiled poet/fiction writer, Stephen Gill also says he is a Trishanku, a Hindu mythological character. He still hears the sound of spring in the stillness of the autumn.

Stephen Gill says that a sonnet is a lyrical poem on love. It has roots in Italy.  Its  pioneer Francesco Petrarch was not able to find a poetic form to express his love for Laura. The form that he uses is of 14 lines in a concentrated structure with a definite rhyming scheme. His form became popular with Elizabethan poets, including William Shakespeare. Elizabethan sonnets are of fourteen lines, divided into two parts, the first part of 8 lines and the second part of six lines.  William Shakespeare modified  his  format slightly.   Later, Gerard Manly Hopkins, a Jesuit, among Victorians, introduces some changes, but the subject remains unchanged. Modern writers attempt sonnets also in blank verse.

Stephen Gill’s sonnets of twelve lines each are based, as are traditional sonnets, on love. Some words from the beginning of the first line form the heading.  In his collection of his own sonnets Love is the singer of life, he changes  the format of the sonnet to suit his purpose.  In other words, he change bottles, but the wine remains the same.  His sonnets are aligned to the left and right sides in the same way as in prose.  He  believes love is a singer of life. He  also believes that love and peace walk side by side and where there is no love there is sickness in every shape and where there is sickness there is no peace– neither personal nor national. It is in the interest of every human to follow the path of love for personal health and governments are  expected  to maintain  peace to nourish a meaningful life and prosperity.   Dr. Gill says that literary critics find elements in his poems that bring them close to Sufi poetry which developed as a religious phenomenon around one thousand years ago.  Sufism existed in every age in some form as love and wisdom existed as did also the messengers of God. He adds that love as its subject and also lyricism remain unchanged. Because of these two elements, the sonnet is called an English ghazal. Sonnet comes from the Italian word sonata that means a little song. Ghazal means conversation with women and was originated in Persia and is popular in India and Pakistan mainly with Urdu poets. It is also lyrical and is often sung or presented in melody. He has loosened some strict structural parts to make his sonnets flexible to meet his requirements. However love and lyrical elements remain unloosened. He believes that to find the lyrical aspect a poem should be read out loud. If the poem does not sound lyrical when read out loud, then it is definitely not a sonnet.

To him lyricism is the expression of deep emotions and feelings in artistic ways. This is to make the expression appear beautiful or more beautiful. The beauty may be in the character or in the style. Any object, such as a flower or the moon, can be lyrical. At the same time, the object can appear lyrical to one person and non-lyrical to another. A poem is subjective as far as its beauty is concerned. A flower, such as rose, may look beautiful to one and not to another.

In the delicious blazing sun I am deluged with your quiet reverie. Your mysterious presence is the rustle in nature’s healthy vibrations in every color and every shape which remind me of the words we exchanged. From the reeds in the garden of the calm in your sights I prepare a pipe to play a thoughtful euphony in your praise. I wish to furbish the altar of my fantasies with the flower of your rich blush of rose. I am free from physical confines when we are confidentially so close.  “