Ariadne’s Notes: We are so honoured to feature the talented and amazing poet , World Poetry Lifetime Achievement Award Winner and poet for peace. He has been featured at the past three World Poetry Peace and Human Rights Exhibitions at the University Of British Columbia and is an active and cherished participant on the World Poetry Canada International Facebook Group. 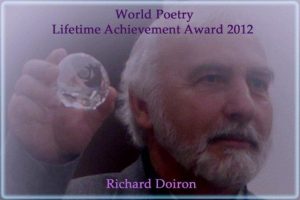 Richard Doiron writes: ” On July 16, I will be a featured reader at the First Annual Sojourner Literary Festival in Richibucto, New Brunswick. The event will now be part of the Richibucto Scallop Festival, at present in its 46th season. Donna Allard, the former President of the Canadian Poetry Association, a well-known presence in literature is behind the inception of the event. Donna has some very credible people working with her on this new venture, which will feature numerous authors of note. This is being held at the O’Leary Inn, on Main Street. I have read there before. In March 2002, I spent 12 hours there, spear-heading a literary event put together by the Acadian Society of New Brunswick. My roots are, after all, Acadian. I look forward to returning to the Inn, which is rich in Victorian quality and traditions. Richibucto is a Mi’kmaq name, the Mi’kmaq being our predominant Native Nation in NB. Nearby is Elsipogtog, our largest reserve. Also nearby is the world famous Kouchibouguac National Park. Fishing has always been one of the biggest economic boosters of the area, which is also steeped in art and culture. We even produced a former Prime Minister of Britain, born in Rexton, Kent County, a stone’s throw away from Richibucto.
Andrew Bonar Law (16 September 1858 – 30 October 1923), commonly called Bonar Law was a British Conservative Party statesman and Prime Minister. 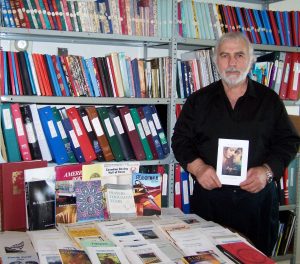 WP: What does poetry mean to you? It seems to be such a big part of your life.

Richard Doiron: Poetry is life itself. It is the beginning and the end and everything in-between. It is joy, sorrow, peace, discord, life and death. It is the sunrise, sunset, the rainbows and the rain. It is  beauty, unsightliness, shadow, light, good, and evil. It is a noun, a verb, an adjective. It is a smile, a frown, fullness, emptiness, desire, indifference, the known and that which cannot be defined. Poetry is everything. It is beyond words. It is the formulation of books yet needs no books to define itself. Some of the foremost poets I have known have been illiterate. Their poetry resounded in their every word. Poetry is a way of being, of seeing, of doing. Native Elders always come to mind for me. To listen to their great words, else to their great silence, is to be moved. In the end, though, poetry is as vague as it is vibrant.

WP: What other aspects of your life are important to you?

Everything is interconnected. It is in disconnecting from the natural world that problems arise. We are part of the natural world, no more, no less. Some have given themselves license, by way of domain, culture, religion, wealth, to have dominion over all of creation, which is nothing short of madness. Equality, justice, balance, ultimately, peace in the world, these things are not negotiable to me. But peace begins with the self. And Love is key. Love does not come conditionally. Those who make conditions to love are not lovers of people but of conditions.

WP: Any message to the world?

Richard Doiron: We are a planet in peril today. Things are not in the least what they seem. History has been distorted. We have had unspeakable horrors perpetrated on earth going back into antiquity. It is said in the Old Testament that where there is no vision the people perish. Today, like never before, we teeter on the brink of oblivion. The weapons on this earth are sufficient to snuff out all life a hundred times over. And we’re using them. Scientists tell us we are losing up to 200 living species daily. We’re also losing one language every 14 days. We have treated this planet as a garbage dump, surely not as the Garden of Eden. Sadly, greed rules the day. It’s either war or talk of war. The sale of weapons, and military expenditures, outrank all else combined. We have disparity: the haves and the have-nots, and this like never before. Violence is found in all sectors. We are a species that has lost its way. And  we need to turn things around and fast. Our oceans, our forests, everything is dying. It never needed to be this way. Again, it goes back to interconnectedness, and to be connected is to understand how it all works. Instead of teaching our children to be robotic, we need to teach Lifeskills, and we need to be loving. We need to revisit our roots and root causes for strife. We still have the very best of role models among our ranks. We need a spiritual revival, not a religious one, and the Spirit is still alive and well, most notably in our enduring First Nations Communities. If we have missed the significance of those teachers, it has been a wilful act. I have to say we need peace, but how do we have peace by continually readying for war? We do not trust our neighbours, quite simply, because we do not trust ourselves. Our neighbour is but a version of us, human, vulnerable, in search of peace and fulfilment. We need a constant meeting of the minds. And we need to stop sending military men to talk peace with other military men. We need to send our poets, artists, and thinkers – the proponents of peace – to reason with their brothers and sisters. Had the old paradigm been tenable, we would surely not be this close to annihilation. I wish peace in the world, but peace means balance. We have thousands of military academies, but where are the peace academies?

Please forgive me for presenting you with such a treatise. My passion, however, is peace, and my poetry is merely an expression of this passion, a passion which, surely, is fuelled by the four-letter word: LOVE.”