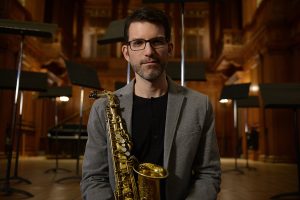 Born in June 1976, Kris Allen grew up outside of Hartford, Connecticut, and studied with Jackie McLean at the Artists Collective and University of Hartford. He inherited a love of music from his mother, a church organist who gave him his first lessons on a tiny xylophone. Although he showed a gift while studying classical piano, the young Allen fell for jazz upon hearing a copy of Lee Morgan’s Blue Note LP The Gigolo and switched to alto saxophone. He entered two venerable jazz academies: first Hall High School in West Hartford, known for nurturing excellent jazz musicians (including Brad Mehldau and Joel Frahm) and then the Artists Collective in Hartford, where founder McLean schooled Allen in the blues and bebop language, composition and arranging. Allen was drafted twice for the Grammy All-American High School Jazz Band and named its Most Valuable Player in 1994.

With a full scholarship, Allen continued his apprenticeship with McLean at the Hartt School of Music. After graduation, Allen moved to New York City. Playing in multiple groups and fronting a few of his own, Allen also toured and recorded with the likes of Gerald Wilson, Illinois Jacquet, Andy Gonzales and Curtis Fuller, as well as Winard Harper, Andy Laverne, Mario Pavone and Helen Sung. An in-demand sideman, Allen has played in the groups of Jen Allen, Noah Baerman, Earl MacDonald, Benje Daneman, Andy Jaffe and Avery Sharpe among others. He is a member and co-founder of the Jazz Samaritan Alliance, as well as a member of the Truth Revolution Recording Collective. In 1999, Allen was handpicked by McLean to teach saxophone and ensembles at the Hartt School. He went on to hold positions at Trinity College, Southern Connecticut State University and the Greater Hartford Academy of the Arts. Since 2013, he has been the Lyell B. Clay Artist in Residence in Jazz at Williams College. Allen has also been a teaching artist for the Litchfield Jazz Festival since 2001.