Ariadne’s Notes: On September 29, 1PM, the World Poetry Café Radio Show, CFRO, 100.5 FM, with producer and host, Ariadne Sawyer and co-host Neall Ryon, super engineer, Victor Shartzman and volunteer Sharon Rowe were honoured to have the first ever book launch on the air! I’m No Hero by Lozan Yolmolky  is superbly  written with heart rending truths describing the pain and joys of life. Published by Silver Bow Publishing 2016. 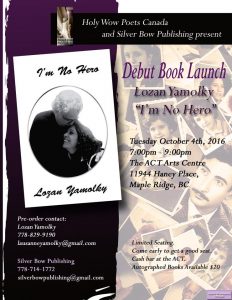 Be sure to go to her book launch! 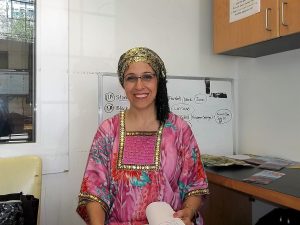 Kurdish from northern Iraq. Left Iraq 1994 lived in Ankara Turkey illegally as asylum seekers till migrated to Canada May 3, 1995

She wrote poetry as early as preteen years but fear of being judged/ ridiculed  by peers & siblings she stopped writing or would throw poems away.

Her uncle (poet, musician, singer & songwriter) inspired her to not stop writing after found her one day folded up crying. He listened to her read one poem she was about to throw away & he was so pleased and begged her to never ever destroy her poems anymore. He offered his house for a safe place to hide her poems.

World Poetry would like to congratulate  her on the new book!

1 thought on “I’m No Hero Book Launch by Lozan Yamolky!”