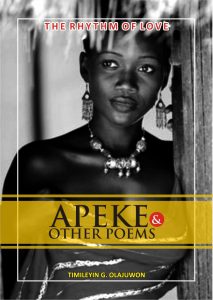 “There is no better Joy than finding someone you love and be loved in return. Timileyin Gabriel Olajuwon’s Apeke and other poems is a book of poetry filled with expression of love in multifaceted lyrical views.

It is a heartfelt series of poems about the universal quest for love, the pain of relationships and the need for family. This book gives a profound look into the mind of the poet, laying bare the raw scars on the soul. 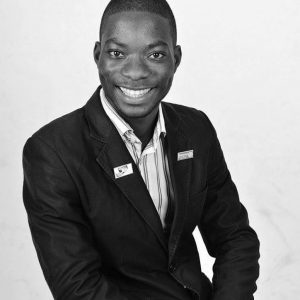 Life is the song in these broken lines

It is the verses on your sweet smiles

It is the striking chord

On the surface of your skin

It is the throne/tune in your heart…

Life is a coin

It is Love and Hate

It is the Cloud on broken faces

The Sun of romantic lovers,

It is life and Death!

Life is two hearts as one

Life is You and I

Life is our love

We are the life!

Timileyin Gabriel Olajuwon (TGO) is an international multi award winner – Awarded the World Poetry Ambassador to Nigeria {Canada} 2013, nominated as Inspirational Poet of the Year by World Friendship Celebration (Pentasi B) Philippines 2013, Won the Write Share Be Read Second International Poetry Competition with his poem REMEMBER O’YE GODS and published in first Female online magazine, United Kingdom 2013, placed in the top ten of the Rabindranath Tagore Award – International English Poetry Competition (India) 2014. Awarded the World Poetry Cultural Youth Peace Ambassador 2014, Awarded Creative Writers Association of Nigeria Poetry Literary Award 2014, ranked third in Anchors Bible competition 2014, Appointed Director of World Poetry Movement (Mexico) 2015, nominated for El-Hibri Foundation Peace Education Prize 2015, Received Pentasi B universal poet of the year (Ghana) 2016, Appointed Director of Writers Capital International Foundation (India) 2016, Honorary mentioned at Sezione Stranieri award 2016, Received “Best Poet on Campus’ at the Campus Mega Award 2016. His works have been featured in poetry anthologies, journals, and magazines both in print and online. He is the Chairman/President of Muse for Peace Foundation a nonprofit organization established towards building peaceful relationship among people of all ages, culture and races; starting from individual to the global communities through Arts, Education, and humanitarian services and the brain behind Muse for World Peace Anthology. He is the author of “Call for Retreat” 2013″