LISTEN TO THE SHOW HERE! http://www.coopradio.org/content/world-poetry-caf%C3%A9-el-mundo-de-la-poesia-9 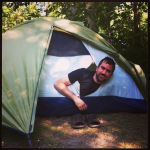 Blair Trewartha is the author of two chapbooks: Break In (Cactus Press, 2010) and Porcupine Burning (Baseline Press, 2012). His poetry has appeared in Carousel, Prism, Event, Existere, and Contemporary Verse 2. Currently residing in London, Ontario, Blair is an active member of Poetry London reading series and an editor for Anstruther Press.  His debut full-length collection of poetry, Easy Fix (Palimpsest Press, 2014), was shortlisted for the 2015 ReLit award, and his poem “Breach” received honourable mention in Arc’s 2016 Poem of the Year

In crumpled leaves, gnats gnaw the backs of burnt necks

waiting for fireworks. We don’t worry about an eclipse

yet a career is a hurtling rock we never counted on.

Everything sealed above will always hold,

but it won’t let us stray far from store fronts and awnings.

You worry about burn out and the intangible,

that will never have a normal night again.

But that’s what saves me from my imagination,

that circus where it locks, where we ride cabs like battering rams

to hospitals, long swords singing the wood-splinter of our entrance.

Soon in this park, they’ll begin to blow things up.

from the water. I think of that beach in Newfoundland that’s losing

all its sand. Shadows we can’t angle without the sun.

On those darkest nights to come, meet me outside the NICU.

Or let me hold you in front of our hatchback when you lose the keys.

How many nights will you open someone up, pull fresh hands and feet

into the room with you? How often, when everything goes blue,

will you return something no one even had yet?

The first one is lit. Spiral of yellow buckshot confetti fire

snuffing out across the lake. I read somewhere that Orcas are learning

to beach themselves for a kill. Two weeks each year, their bulging bodies

breach a mere sand-dune away from suicide, wiggle back to blue-depth

before they’re trapped. I’ll bet that’s a trick we could learn

if it comes to that.