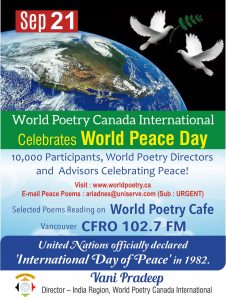 Ariadne’s Notes: January 18, 1:30 pm, CFRO, 100.5 FM, PST.  Also, a wonderful interview with Janet Russ  from Arizona on her life and the impactful films that they are working on. Our World Poetry Café Team: Ariadne Sawyer, MA, producer and host, Dr. Diego Bastianutti, guest host and  Sharon Rowe, special volunteer. Music by Opoku Mensah and a song by Luciano Pavarotti. English and Italian.  Included was a fascinating e-peace poem by  the well known poetess Huguette Bertrand, entitled GOLDEN PEACE and read by Victor Swartzman.

*LISTEN HERE TO THE SHOW!* 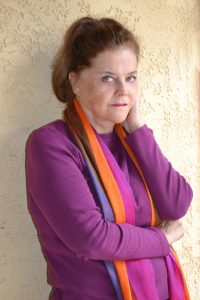 Janet Russ is working on getting production companies to make the following exciting films. If you are interested in being part of these great films, contact Osiris Munir at: osiris.munir@gmail.com 15 minutes Media.

*** THE BLACK SWALLOW is Eugene Jacques Bullard, one of the greatest American flying aces of WWI, who never flew for the USA.  All of his medals and military awards are from France.  As a  black youth in GA (circa 1900), his childhood dream was to live in France, because he’d been told  no matter the color of your skin, All blood runs red. Running away from home at 7, he was a carnival worker, a stowaway on a ship to Europe, a prize fighter in London, and a song & dance man, A  French WWI Flying Ace with more kills than the Red Baron (US ARMY rejected him because he was black), a nightclub owner, a spy for the Underground during WWII, returning to menial jobs in NY after the war. Years ago David Gerber tried to get this film made but the climate wasn’t right.  I have all of the research and am seeking an Experienced producer/production company who can handle a film that spans 60 years and covers 3 continents.

***IN SELF DEFENSE – In 1956 the song “Long Tall Sally” was a hit for Pat Boone; NO, you say, Little Richard!  Welcome to the music industry’s dirty little secret of Crossover Music.  WHITE musicians performed for white audiences; BLACK artists ditto for black audiences.  That’s the way it was until DJ Alan Freed starting having ALL teenagers at his dance parties and being arrested for doing it.  In our script, our teen idol Frankie Avalon clone risks his career to integrate the world of Rock & Roll.  I have the script, budget & research materials.  Excellent chance to return to Philadelphia where it all began, re-record some of the songs for a hit soundtrack and retrace a piece of music history.  Would like to team up with producer/production company with a knack for the 50’s and the means to make it happen.  Want someone like the “La La Land” or “Pitch Perfect” team to help me recreate this period of music history.

*** JUST TWO OF A KIND – Its’ an Old Fashion John Wayne style buddy western.  Bob Shelton was the founder of  Old Tucson Studios and produced some of the most beloved Western films in his 40 years of operation, McClintock, Outlaw & Josie Wales, Young Guns I & II, and many more. On his 95th birthday he made us promised to get this film done.  As he said, “If the Duke, Mitchum and Martin were alive, we’d be filming it”.  As a legacy to the Old Time Cowboy movies, we (Carolyn Shelton, wife; Candi Shelton, daughter; Wendy Wolverton, producer and myself, producer), formed JTOAK,LLC, teamed up with Caravan West studio and are determined to make this film.  What I need to get it into completion is additional funding of $1.3 million dollars.

Janet says:  “In the current Industry climate there is a drive to get women up the ladder in Hollywood.  I look forward to some of these folks reaching out to us to get these films made.  THANK YOU”.

She began her financial career at the age of 14 by doing tax returns.  She added the Entertainment aspect when, at the University of Az, she developed, wrote and co-hosted a Consumer Help TV show for Educational Television.  Summer vacations were spent doing melodrams where she worked all aspect of theater and film from – writing, tech, wardrobe, PR and choreography.  Janet also composed and performed musical scores, and produced Children’s Theater.

A chance meeting during a L.A. traffic jam, led to a show biz assignment.  She joined Gymjazz Corporation as a financial troubleshooter for their video series.  Never one to be idle she created an Entertainment tax class and taught it to various groups in Southern California.

Janet is active in numerous industry related organization, one being The Corporation for the Disabled in Telecommunication, where she served as a co-producer on the Emmy winning documentary “Breaking Ground” and produced the film festival “Superfest”.

She executive produced the western “Decoy” for an AZ film group.  Janet developed the film arm of Perimeter Bicycling Association, and was executive producer of their documentary, “El Tour de Tucson”.  These efforts garnered her two Telly awards for production excellence.  She is the CFO of the Los Angeles Childrens Theatre and in this capacity has worked on several film projects for Gerald Gordon Enterprises.

After developing and instituting accounting procedures for numerous companies and individuals, Janet began her management company, HR, LTD.  She continues to run the gamut of work from in-house money management, on location assignments, to troubleshooting tax & financial problems for productions.

Thanks to Osiris Munir for this great guest!