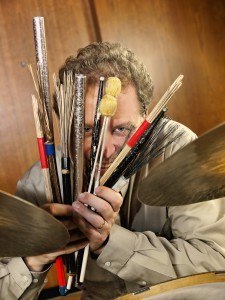 Ariadne’s Notes:  On May 17,  1:30 PM PST, the World Poetry Cafe , 100.5 FM , CFRO welcomed the talented drummer, composer and musician , Phil Haynes to the show. We were celebrating his two new CD’s, No Fast Food’s Settings For Three and My Favorite Things   which to me felt like a breath of much needed freedom. in this world. Our sound engineer Victor Swartzman especially enjoyed the slow Star Track theme which was played at the end.The CD’s are at www.cornerstorejazz.com/shop  Sales are used to help others create their CD’s. You can reach Phil at : philhaynes.com

Also on the show was a message from Alaha Ahrar, an interview with Koyali Burman and another story by Sharon Rowe from her Big Bessie Book: https://www.amazon.com/Big-Bessie-Stories-Sharon-Rowe/dp/1926457005/ref=sr_1_2?s=books&ie=UTF8&qid=1416163528&sr=1-2&keywords=big+Bessie 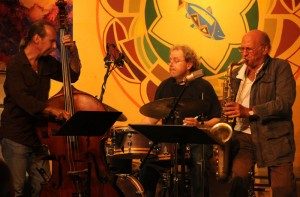 “[No Fast Food is] ridiculously good — One of the two best trios since the legendary Elvin Jones.”

“Just like Jack DeJohnette or Bob Moses, [Haynes] is broadening the beat by means of a significantly melodic component. You don’t have to be a prophet to foresee a great future.” — Heinrich Oehmsen, Szene

It’s not that he has anything against whiskers on kittens, mind you, but these are a few of drummer Phil Haynes’ favorite things: creating in the moment with old friends, who just happen to be some of the most inventive improvisers on the scene; digging deep into the rich musical legacy of the 1960s; navigating original compositions that offer tricky surprises and wide open spaces, just perfect for inspired spontaneity. With a wide-ranging pair of new releases featuring his bands Free Country and No Fast Food, Haynes gets to indulge all of those faves alongside an amazing crew sure to make you forget any dog bites or bee stings. Both are due for release on June 1, 2018 through Corner Store Jazz.

My Favorite Things (1960-1969) concludes a trilogy by Haynes’ free-wheeling “jazz-grass” string band Free Country, where he’s joined by longtime collaborators Hank Roberts (cello and vocals), Jim Yanda (guitar) and Drew Gress (bass). Released over nearly two decades, the band’s three albums encompass nearly the entire history of American popular music in their own irreverent, stripped-down fashion: their 1999 debut focused on pre-1900 tunes from the Revolutionary War to Stephen Foster; The Way the West Was Won took on the first half of the 20th century, with cowboy songs and Hollywood movie soundtracks.

The concluding chapter narrows the focus to a single decade, but what a decade: over the course of two discs, the quartet takes on everything from John Coltrane, The Beatles and Jimi Hendrix to Burt Bacharach and the theme from Star Trek – as Haynes himself puts it, “you’ve got everything from schmaltz to the highest art.”

Beyond the fact that the ‘60s were the formative years for the band’s members, the decade is so ripe for extensive reinvention because, Haynes explains, “It was our last cultural revolution. This is the last decade that everybody agrees on, so this is a look at that psychedelic, diverse musical landscape. We face many of the same questions now that we faced then, and it will be interesting to see if there’s another social revolution.”

If there is, Free Country is here to provide the soundtrack. With Roberts’ wry baritone, the knotty interaction of the strings, Haynes’ loose-limbed, evocative percussion, and a profound conversational spark forged over decades of collaboration and the magical live sound born of recording in the round, the band captures the spirit of the 1960s with the urgency of now. “The ‘60s had this great American outpouring of creativity,” Haynes says. “There was music that everybody shared: Santana and The Beatles knew about A Love Supreme, from Hendrix to what Bernstein did on Broadway, everything was changing. This band focuses all those things into one sound.”

Haynes – My Favorite Things, Settings for Three                                           On the opposite end of the creative spectrum, No Fast Food, with Gress and NEA Jazz Master David Liebman, was formed as an outlet for Haynes’ compositions. The trio’s third album, Settings For Three, is their first not recorded in concert but carries the electricity of their live performances into the studio. As the straightforward title implies, the intent was simply to provide fodder for the three musicians’ estimable improvisational gifts, or as Haynes puts it, “I wanted to give the guys some new settings to play in and also familiar territory to romp in.”

The opening track, “El Smoke,” takes its name and inspiration from a different group – Haynes’ collective quartet Joint Venture, where he and Gress are joined by saxophonist Ellery Eskelin and trumpeter Paul Smoker. Of course, No Fast Food make it utterly their own, ranging from the atmospheric to the rhapsodic over the track’s ten minutes. Haynes has written lyrics for the second tune, “Joy,” though they’re not sung on the recording. No matter, as Lieb and Gress seem to have absorbed the composer’s poetic meaning, which looks at the many different sides of joy, from the outwardly ecstatic to the more profound and complicated.

“There’s joy as we know it,” Haynes says, “but then there are all these other shadow aspects of joy. I really appreciated how the guys played on it because they reveal those different depths: not just that first expression but then all the ripples that happen beyond that.”

Speaking of multi-faceted, the blues offers an endless supply of variations and possibilities, and that’s certainly the case with the wide-open “Blue Dop.” High-spirited and grooving in this rendition, it’s a piece that suggests myriad approaches and changes each time the trio launches into it. The onomatopoeic “Whack Whap” shows off the mirth and humor that the three can share, a wild avalanche of sounds and sonic surprises.

“Longer Shorter” pays homage to Wayne Shorter, taking the legendary saxophonist’s composition “Pinocchio” as a starting point. The hard-driving, sharp-angled tune nods toward Liebman’s history with Miles Davis and Elvin Jones while spotlighting his singular approach to the soprano. The ballad “String Theory,” which kicks off with Liebman conjuring fluttering bird calls on flute, is a vehicle for Gress’ poignant arco emoting. To close the album, “Shramba” takes a different twist on the samba, progressing through all twelve keys over Haynes’ rollicking rhythmic bed.

Through the simultaneous release of these two thrilling albums, Haynes provides a study of two facets of his expansive musical personality. Both are wildly inventive and thrive on the personal interactions of the musicians involved, but where My Favorite Things is subversively accessible, Settings For Three is an enticing challenge. “You’ve got one group where the universe is the option,” Haynes says, “and another group where the microcosm is the universe. They’re very different kinds of playing yet you look for freedom in both.”

Source with thanks: Braitwaite and Katz