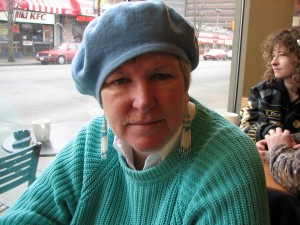 Sharon Taylor was born in Cheam, Surrey England and immigrated to Canada with her parents when she was five.

Sharon has won several poetry contests. Her publications include several articles and her poetry book, “Deep System” was published in 2005 by Perceptions Press. She has done volunteer work for Pandora’s Collective and World Poetry Association both of whom awarded Sharon certificates of appreciation, and has also volunteered with The International Writers Festival where she received acclaim for her outstanding fundraising abilities.

In addition, Sharon has had success with her visual art having a juried piece at the PNE and also having her work on display at the Pan Pacific Hotel and the Vancouver Public Library among other accomplishments.

Her poetry expresses her love for nature and her hopes for the future.Sharon has found her niche in the poetry and arts communities in Vancouver, B.C. where she has resided for most of her life.

My imagination, my creativity
Take flight this starry night
To the edges of the Universe
That understands me.
For who will comprehend as the
Vast cosmos spoken into existence
Unknown eons ago
Pens her poems across the nighttime sky
With the brilliant tails of shooting stars?

Oh! Come to me everlasting starlight
A gentle embrace, infuse my soul
With your poetry
Dawn approaches
I awake!