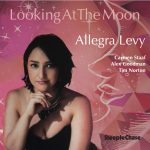 Ariadne’s Notes: The World Poetry Café Radio Show, August 9, CFRO 100.5 FM welcomed the great musician and singer, Allegra Levy’ at 1:30 PM, PST.  The CD is lovely, with the focus being on the mysterious moon, romantic and enticing.  She is rising young New York-based singer-songwriter with a  new album Looking at the Moon by SteepleChase Records. https://www.allegralevy.com/ 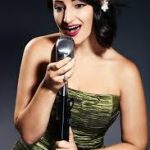 Rising young New York-based singer-songwriter Allegra Levy’s new album Looking at the Moon is out TODAY (June 15, 2018) via SteepleChase Records. On her third release Levy – known as a “double-barreled talent” (JazzTimes) for both her vocalism and song-writing – turns to songs written by others, with a unifying theme: the moon.

Looking at the Moon features 13 much-loved odes to the shimmering orb, from “Blue Moon” and “Paper Moon” to the inimitable “No Moon at All.” Her collaborators on the new record are bassist Tim Norton and her longtime accompanist Carmen Staaf, plus rising guitarist Alex Goodman.

“Levy’s music is sophisticated, worldly and swinging, with a wide range of tonal colors and moods not unlike Portland’s Pink Martini. Levy’s voice is one we should expect to hear from for a long time.”— Mike Hamad, Hartford Courant

“Her lyrics are uncommonly smart, full of striking imagery and a pervasive angst. As all first-rate jazz vocalists do, she sings in character, word by word, line by line.” — Alan Young, New York Music Daily

The usual way to start a jazz vocal career is to stick with standards, trilling and scatting in the well-traveled tracks of great singers who have come before. Rising young New York-based singer-songwriter Allegra Levy eschewed that approach on her acclaimed first two albums, which consisted almost entirely of original compositions. Now, with her third release, she turns to songs written by others, with a unifying theme: the moon.

Looking at the Moon, due June 15, 2018 on SteepleChase Records, features 13 much-loved odes to the shimmering orb, from “Blue Moon” and “Paper Moon” to the inimitable “No Moon at All.”

With her new album Looking at the Moon, Levy abandons her autobiographical “city” theme, setting her sights out of this world, but also, in another respect, on more familiar ground. “I was a little bit nervous about doing a record that was not original works because I’m still trying to develop my voice as a composer,” the 28-year-old Levy admits. “But I’ve always wanted to do this moon-themed thing. For some reason, people seem to write really good tunes when it comes to the elusive moon.”

Levy concedes that there is nothing all that novel when it comes to singing about the moon. Frank Sinatra didn’t just fly us to the moon, for example; he recorded an entire album about it. Yet the lunar sphere has long fascinated Levy. She was moonstruck from an early age. “The first thing that my mom used to sing to me when I was a young child was ‘Moonshadow,’” she recalls. Cat Stevens’ 1970 pop hit proved to be more than a hip lullaby for her. It was love at first sound.

The first song Levy ever performed publicly in her native Connecticut, as a teenager, was “How High the Moon,” one of Ella Fitzgerald’s signature tunes. Later, when required to create a big-band chart for her senior thesis at New England Conservatory, she chose Henry Mancini’s “Moon River.” She closed most of her gigs with that song for years and has adapted it for the opening track. “There was no real reason for any of these moon connections,” she says. “They just seemed to appear in every phase of my life.”