This is a sample of Nick Curl’s cartoon work. Both Sharon and Big Bessie thank him for his help. For more info, please go to his link and comment on his work. He is interested in working with others. Link: https://www.youtube.com/channel/UCur5re54wuR5sGm_EJZbu3A

Ariadne’s Notes: On September 6, the World Poetry Café , CFRO, 100.5 FM, Welcomed the poet, musician and cartoonist, Nick Curl to the show. A wonderful interview of Nick’s music, his answer to a question by a 12 year old living in Japan about how to get started in cartooning. Also, a Miracle poem  by Monsif Beroual from Morocco.

Included was another story from the Big Bessie Series by Sharon Rowe. Victor Schwartzman was away but the technical controls were kindly supplied by Kerry Buckner with our great thanks.

HERE IS THE RADIO SHOW! 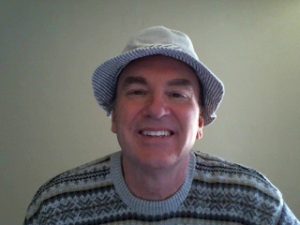 Currently resides in Pittsburgh, PA.
On Facebook as Nick Curl.
Earned a BSEE degree from University of Michigan in 1983.
Earned a MSEE degree from Georgia Institute of Technology in 1995.
Earned a MBA degree from Georgia State University in 1998.
After graduating from high school in 1975 I enlisted in the United States Army. While in the Army I began to learn how to play the guitar. I never took music lessons so for a long time I didn’t understand how a songwriter wrote a song.
In 1978 I received an Honorable Discharge from the Army. I attended various universities and built a career in computer hardware/software design and test and held employment in various industries including Aeronautical, Telecommunications and Consumer Products. During this time my guitar remained mostly in its case but it was always in the back of my mind that writing songs was something I wanted to do.
I retired from engineering in 2014 and began to dabble in poetry and music. I began creating animated poems. Some of the poems may be useful for teaching children about relational concepts such as empathy, friendship and helping those in need.
I was able to find information on the internet about music theory. I downloaded diagrams that showed the guitar chords and notes for songs that I liked. I used the diagrams to play the songs and it sounded like it does on the radio. By studing the diagrams, I began to understand how songwriters used music theory to create their songs.
I create animated poems primarily meant for young children but can be enjoyed by people of all ages. Some poems are designed as “feel good” stories and may be used to provide teaching points for young children about how to interact with others in a positive way. In such cases a main character finds themselves in a difficult situation requiring assistance. Someone provides assistance and a new friendship is created. These poems attempt to convey three positive concepts: recognizing when someone is in need of help; performing an act of kindness; and developing friendships.
Each poem consists of two parts: text and video. Although the text can be presented as a stand alone poem, the video provides a necessary part of the overall story.
I now spend most of my free time creating music and animated poetry. I upload the poems and songs to my YouTube channel called

nik-Vidz:https://www.youtube.com/channel/UCur5re54wuR5sGm_EJZbu3A
Still very much an amateur in both songwriting and poetry, I continue to seek out opportunities to connect with other like-minded people who share my interests in animation and music – two enjoyable areas of entertainment.

A honey bee buzzed right by me and nearly knocked me down.
But then she circled back to see that I was safe and sound.
“Please pardon me, good sir.” said she. “I’m not my self today.”
“For something bad has just occurred, much to my dismay.”
And as she told me of her plight her eyes began to tear.
It soon was clear, as she drew near, that she had much to fear.
“My babies and me live in a tree that’s just around the bend.”
“A row of trees is what you’ll see and ours is at the end.”
“A sudden gust of wind and dust blew through and shook our tree.”
“I heard a thump and felt a bump, my babies next to me.”
“And when I felt it save enough I went outside and found”
“Our home that once was way up high had fallen to the ground.”
“My babies are too young and must not venture from the hive.”
“And now I fear if we stay here my babies won’t survive.”
“I must return my babies to the safety of the tree.”
“And so I seek a kindly soul to help my family.”
“You need not take another step.” said I to the bee.
“For I am here and I will help return you to your tree.”
With no delay she lead the way and took me on a run.
And when we arrived I saw the hive lying in the sun.
With gentle hands I raised the hive and set it in a space
Where never will another wind dislodge it from its place.
So now the bee and family are safe once again.
And on this day, I’m glad to say, I’ve found another friend.

Nick Curl (C) All rights reserved by the author.