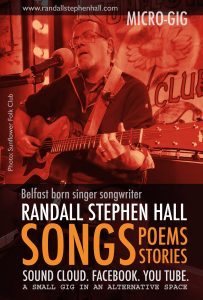 Ariadne’s Notes:  The World Poetry Café Radio Show,  November 15 at 1-130 PM PST, CFRO 100.5 FM   featured the talented and amazing Randall Stephen Hall  with music, poetry and stories! Due to a time difference, he was not able to call in but our radio audience greatly enjoyed his music and bio as we read from the fascinating Canada Link which is listed below. Also, we welcomed  the wonderful Peter Nelson with his new CD;Ash, Dust and the Chalkboard Cinema, He shared his unique story of healing and recovery and added suggestions. The music mirrors his story and is very healing.  Peter comes to us courtesy of Braitwaite and Katz.  World Poetry Contributors: Alaha Ahar from Afghanistan  and the US with tips and a poem by regular contributor Jeanne Probst. The team: Ariadne Sawyer, MA, Host and producer, Victor Schwartzman super tech and special Volunteer Sharon Rowe completed the team. 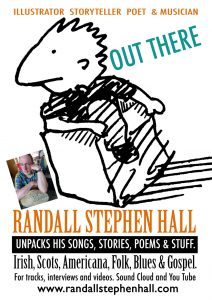 “I travelled to Vancouver Island in 2000 and in 2001 I travelled to Sioux Valley Reserve
(near Brandon) which I found interesting too. Both trips were a kind of pilgrimage, back to Canada, where my great grandfather, William Frederick, had been born in 1864.”

“His father, Richard, was born in Westmeath, in Ireland in 1828. He had joined the army in 1848, around the time of the Irish Famine. His own journey had taken him to Cape Colony, South Africa and India during the Indian Mutiny. He travelled to Canada in 1861 where his first 6 children were born.”

On my trip to Vancouver Island I went to look at the native art and to hopefully have contact with some native practitioners themselves. Along the way I visited Ladysmith, Duncan, Cowichan, Campbell River, Quadra Island, Port Alberni, Tofino, Port Hardy, Fort Rupert and Alert Bay along with Sontulla.

Up until that time I had barely done any storytelling workshops or had found my way back into making music. All that changed after my first trip to Canada. So you could say that my trip to Canada was expansive and very worthwhile.

I was born in Belfast in October 1957. I nearly didn’t survive my birth. I had to really struggle to get here. I was born into a political context I didn’t understand, in Northern Ireland and it has taken me most of my life to educate myself about Ireland in general.

Because of the very divisions that still exist where I live today (wasn’t there a peace process?) I was raised a Presbyterian (Protestant) automatically branding me an outsider. While many people just accept that it made me very curious about labels and the cultural architecture that makes us seem different to each other.

LINK: “MY TWO HANDS”. (Including THE BOOK OF YERDAGH & MY DA TOO PART 1.)
https://www.youtube.com/watch?v=Y15zxlKwVaE

During my education, up until the age of 18, I had little or no contact with the opposite side of the Irish fence here, other than through some simple friendships, playing beyond the restrictive and divided barriers of location, education, church and social politics. Even then I was asking myself questions about these barriers.

My first serious girlfriend was a Catholic. That too, left a lasting mark upon me in a positive way.
1976-1980. Art College introduced me to many more Catholics but I thought then, as I still do, that our divided education systems kept us apart for far too long in our early lives. Sadly, things are much the same now and even though there has been a Peace Process there has not been a religious, educational or cultural process for the mind.

1980-1988. After Art College I worked in local adverting as a designer and studio artist, learning the basics. After six years I became a Freelance Illustrator still working in advertising, taking me beyond Belfast to Dublin and Glasgow in Scotland.

1988-1998. In 1996 I produced my first book called “THE GANT’S CAUSEWAY”, a local legend that tells the story of two local giants battling against each other. This led me towards storytelling in schools and beginning to understand how to tell a story to an audience of children or adults.

This is part of an animated DVD published in 2005. It utilises English, Irish, Ulster Scots, Scots Gaelic and Scots. All languages associated with this region.

1998-2018. During this period I began to do more workshops in schools, taking me to many schools around Northern Ireland but up into Donegal as well.

Around 2007 I began to write songs in a more focused way, playing some live music.

A collection of 21 songs and poems. This pushed me into playing with a live band called The Moon Shed. From 2010 to the present I have written many songs and poems, many of which can be accessed at my website www.randallstephenhall.com

In 2016 not there collection of 17 songs and poems was released called “RE-WIRED”. Followeec by a live sampler album called “Leaving the Box Room”.

Of course this isn’t the whole story, just some highlights and being an outsider has had some advantages. I’m blessed by the opportunity to be creative on a daily basis.

I’ll end with this poem called “THE GATE IN THE FIELD”
https://soundcloud.com/hugh-midden-speaks/the-gate-in-the-field-6-5-1

Further songs and poems can be found at