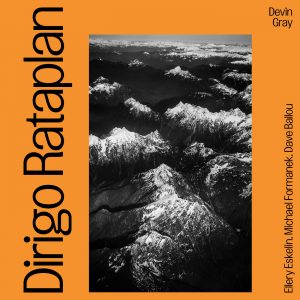 Ariadne’s Notes: On January 10, at 1:30 PM PST  the World Poetry Café Radio Show CFRO 100.5 FM   welcomed  the talented drummer-Composer Devin Gray celebrating the  second album, Dirigo Rataplan II, with performances in Belgium, the UK and Switzerland. Featuring his all-star quartet Dirigo Rataplan with Ellery Eskelin, Michael Formanek and Dave Ballou. for more info: http://devingraymusic.com/ Also, a gentleman frim Switzerland wrote in to tell us that he attended their European concert and he really enjoyed it and was excited about Devin coming on the show! This was really exciting!

It was a fascinating show, delving into the intricacies of composing and the personal attention to detail and the need to put mind, body and soul into each composition. Also discussed was the difficulty of making a career out of it at this time when it is so hard to make a living creating and playing Jazz.   This show is a MUST Hear for composers , musicians and creators. 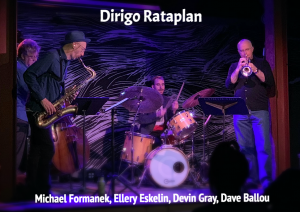 There are times when music lovers can just feel a talent coming into his or her own, when that artist is someone to catch onstage or on record at every opportunity. Drummer-composer Gray has arrived at such a moment. The Brooklyn-based artist made his leader debut in 2012 with the Skirl Records release Dirigo Rataplan, which featured him fronting the eponymous band with Eskelin, Formanek and Ballou, each a master improviser renowned far and wide among fans of creative music. Cadence magazine declared that initial disc to be “fantastic,” while JazzTimes said that Gray’s debut represented “the work of a young artist who knows who he is.”

Now, after six years of intensive experience as a leader and sideman on both sides of the Atlantic, Gray has reconvened this all-star group for Dirigo Rataplan II, released on CD, vinyl, digitally and for streaming via Rataplan Records on Sept. 21, 2018. Time Out New York has praised Gray’s compositions for balancing “formal elasticity with a meticulous sense of pacing.” The new album brims with more earworm melody, richly implied harmony and a loose-limbed sense of rhythm as something physical and flowing – as blood, as breath. Fans of jazz from Ornette Coleman and Henry Threadgill to Dave Holland and Craig Taborn will dig this organic mix of composition and improvisation, structure and freedom, atmosphere and dynamism.

About the evolution of Dirigo Rataplan and his writing for the band, Gray says: “I’ve become more at ease with following my natural artistic impulses. The experiences I’ve had over the past six years have been so inspiring – in the intense, ultra-energized New York jazz scene, of course, but also in Europe, where players in improvised music are so open to different genres and have this holistic approach to art and creativity. With Dirigo Rataplan II, there is more free improvisation in the music, but I also think the melodic fluidity between the composition and the improvisation is more seamless, with one flowing into the other in a way that I really like. This music is personal for me, but I want Mike, Ellery and Dave to do what it is they do, to maximize the pieces in the way that I know they can.”

About working with Gray, Formanek says: “Devin has grown as a composer since that first quartet recording session in 2011, but most important, he has a much more evolved sense of who he is as a musician, and also of who we are in the band as improvisers. These instincts take time to develop, and it has been great to see that process unfold in both his playing and his composing. This music is free and open with a lot of room for improvisation, but the tunes also have an intrinsic rhythmic and melodic character to them, a color and energy. With the quartet having played together more now, the sessions for the new album felt even better.”

For Gray, what is most vital about Formanek “is not just that his tone and sense of time are so incredible. It’s also that he cares so much about doing whatever he can to ensure the quality of the music in front of him. He’s a composer’s improviser, in that way. I feel this total, unspoken trust with him.” About Eskelin, Gray says: “Ellery sets the bar so high for improvisation. The fluidity of his solos, the intense forward motion – that’s what New York musicians have more than anyone else.” Regarding Ballou, the drummer adds: “I’ve known Dave’s playing intimately since I was a kid. I don’t think he has ever sounded better, with that beautiful tone and wide palette of expression. He brings a strong interpretive sense to my music in that he anticipates what I’m looking for, yet via his own sensibility. Working with cats like this, you don’t have to worry about individualism – it’s in everything they do. They bring what are just notes on a page to real life.”

Reflecting further on Dirigo Rataplan II, Gray concludes: “I don’t set out to make jazz records, per se. I set out to make music, period – to capture the moment, the contemporary feel of the music, hoping that it can reflect in some small way how we live now and what we all have to deal with as human beings in the world.”

All About Jazz gave the recording four stars and called it “a high-flying, breathtaking slice of up-to-the-minute jazz from four musicians at the top of their games.”

Source and thanks to Braitwaite and Katz.