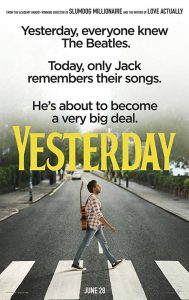 A Must See Film! Yesterday, Showing now in Vancouver!

‘Yesterday’ is a delightful film with elements of magic and humor! It tells the story of a struggling musician named Jack who (actor Himesh Patel) who suddenly realizes he’s the only person alive who remembers The Beatles and their music. After he wakes up from a bus accident, he starts the almost impossible journey to bring back their songs to the public who learns to love them. After, numerous adventures, he overcomes setbacks and finally finds success.

This enjoyable film presents a fascinating interaction of cultures which combines many unique qualities.

The songs really stand out, reintroducing the audience to the past and welcoming new listeners.

Jack (Himesh Patel) sings a number of Beatles classics, including ‘Yesterday’, ‘Hey Jude’, ‘I Wanna Hold Your Hand’ and ‘Let It Be Something’ and ‘Yesterday.

For the Afro News!