Other features are coming.

Mini-reviews with hosts Ariadne Sawyer and Victor Schwartzman due to time constraints.

Before You Know It, the film will be released in Vancouver on Friday, October 18 at the Vancity Theatre. Unfortunately, I could not find a poster.

In this everchanging film, full of surprises, stage manager Rachel Gurner (Hannah Pearl Utt) still lives in her childhood apartment above the theater her family owns and operates in New York City. Level-headed Rachel is the only thing standing between her family — her off-kilter actress sister Jackie (Jen Tullock), her eccentric playwright father Mel (Mandy Patinkin), and her deadpan preteen niece Dodge (Oona Yaffe) — and utter chaos. Then, in the wake of a sudden family tragedy, Rachel and Jackie learn their presumed-deceased mother (Judith Light) is not just alive but thriving as a soap-opera star. Also starring Mike Colter and Alec Baldwin. Directed By: Hannah Pearl Utt. Written By: Hannah Pearl Utt, Jen Tullock.

As Victor says: he loves a film from New York! 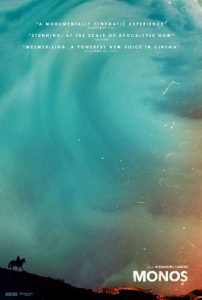 MONOS, a fascinating film opening on Saturday, October 18, at Van City Theatre in Vancouver BC, Canada.

This powerful film shows the possibilities of mindsets and change.

The teenage commandos perform military training exercises by day and indulge in youthful hedonism by night, an unconventional family bound together under a shadowy force known only as The Organization. After an ambush drives the squadron into the jungle, both the mission and the intricate bonds between the group begin to disintegrate. Order descends into chaos and within MONOS the strong begin to prey on the weak in this vivid, cautionary fever dream.

With a rapturous score by Mica Levi (only her third, after UNDER THE SKIN and JACKIE), director Alejandro Landes examines the chaos and absurdity of war from the unique perspective of adolescence, recalling LORD OF THE FLIES and BEAU TRAVAIL in a way that feels wholly original. Landes brings together a diverse young cast of both seasoned professionals (including Hannah Montana’s Moisés Arias) and untrained neophytes and thrusts them into an unforgiving, irrational and often surreal environment where anything can happen — even peace. WRITTEN BY: Alejandro Landes, Alexis Dos Santos. DIRECTED BY: Alejandro Landes.SOURCE: TARO PR.

Peaceathon poets: Peace Poems by Amita J Sanghavi, WP Ambassador to Oman who is also working on our Peaceathon Kindle Book,  A Fragile Peace by Cesar Molina Consuegra, Montreal and time permitting , chapter 1, Peace by Davy Fidel , Nigeria, an official book launch for Rehana Daud  with her books: slithering Shadows  and Secrets of Moonlight are on Amazon and Kindle.