Ariadne’s Notes: The World Poetry Cafe radio show, 100.5 FM on October 24 from 1-2 pm PST had a fascinating show with star co-host Diego Bastinutti and the amazing Victor Schwartzman tech engineer. Calling in at 1:10 pm PST from Italy  was Pasquale Verdicchio  who is teaching for University of California , San Diego program on poetry and walking.

Calling in at 1:30 pm PST, from the Netherlands was Nancy Braitwaite, world renowned clarinetist from the Netherlands about a new beautiful CD: Onions, in Paradise composed by Edith Hemingway  who is in her nineties. Nancy spoke about the creation and collaboration in the making of this new CD.

Right after the show, several listeners in the studio were interested in listening to the CD and one found it on I-Toons to listen to on the way home. It is also available on Amazon and many other platforms.

Great response! Another great musician from Braitwaite and Katz! 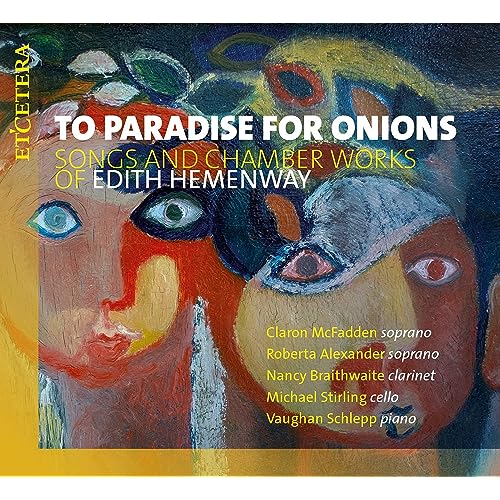 Internationally renowned clarinetist and educator Nancy Braithwaite has performed throughout the USA, Europe and China.  As a soloist, she has performed with the Rochester Philharmonic, Savannah Symphony Orchestra and others in works by Mozart, Nielsen, Von Weber and Rossini.  In addition, she has  been very active in chamber music with repertoire encompassing more than 300 works.

Braithwaite studied with Stanley Hasty at the renowned Eastman School of Music graduating with the highest musical distinction, the Performers Certificate.

While studying for her master’s degree at Northwestern University with Robert Marcellus (former principal clarinetist of the Cleveland Orchestra under George Szell), she worked as his teaching assistant in both clarinet and chamber music. In the USA she furthered her study with Larry Combs, former principal clarinetist of the Chicago Symphony Orchestra.  In Europe she earned a chamber music degree with the renowned violinist Eli Goren, former leader of the Allegri Quartet and Melos Ensemble and concertmaster of the BBC Symphony, and continued her clarinet studies with the internationally acclaimed Belgian soloist, Walter Boeykens.

At the age of 23 she won the position of principal clarinetist with the Savannah Symphony Orchestra.  While there she was also chosen to participate in summer festivals in Spoleto (Italy), Maine (USA) and Tanglewood (USA). In addition she performed for several seasons as principal clarinet of the Chicago Civic Orchestra, the training orchestra for the Chicago Symphony Orchestra, while a student at Northwestern University.

Since moving to The Netherlands , Nancy has made a number of radio recordings, toured throughout much of Europe and China and performed as guest artist with Camilli Quartet, Raphael Quartet, Goffriller Quartet, Spinoza Quartet, Engadin Quartet and Trio Microcosmos in works by Mozart, Brahms, Hindemith, Bliss, Keuris, Howells and von Weber.  Numerous composers have written works for her ranging in instrumentation from solo clarinet to octet.

Braithwaite is founder and artistic director of the series Kromme-Rijn Concerten in Bunnik in which the Arto Ensemble functions as the core group performing with a wide variety of guest artists.  In addition, she founded a concert series in Utrecht with the Rietveld Ensemble in 2014 which has now expanded with a repeat of the series in Amsterdam and The Hague.

In 2015 Nancy toured China giving master classes and recitals in four major Chinese cities and in March 2016 she  visited China again both as a jury member for a major clarinet competition in Beijing and to give master classes and recitals. In 2016 Nancy gave masterclasses as  Erasmus exchange Professor  at the Conservatory of Castellón de la Plana, Spain   and in April 2017 she gave masterclasses at the conservatory of Malaga, Spain in another Erasmus exchange.

In October 2016 Braithwaite was  a jury member for the clarinet competition on the Clarinet and Saxophone Association on Great Britain during their 40th anniversary celebration and she performed in the evening Gala Concert of   this event.

Nancy is Professor of Clarinet and Chamber Music at the Rotterdam Conservatory (Codarts)  The Netherlands.

She endorses the Uebel Superior clarinets and is a member of the Silverstein Inspiring Pro team endorsing the  Silverstein.