Ariadne’s Notes: The World Poetry Cafe radio show,  CFRO, 100.5 FM on November 14, 1:10 pm,celebrated the Poet Laureate of Calgary, Sheri-D Wilson in a delightful interview about her work and her powerful poetry. Also on the show  at 1:30 pm PST ,Ezra Weiss with his new CD We Limit Not the Truth of God . E-poets, Bozena Helena Mazur-Nowak, Poland and England and Pieter-Joris Morssink , Australia, and a new story by Sharon Rowe called Big Bessie Ends the Strike. A capsule of the Brain Bulletin Series plus news completed the show. 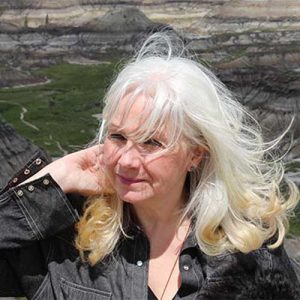 Sheri-D Wilson has 9 collections of poetry—most recent—Open Letter: Woman against Violence against Women; & Goddess Gone Fishing for a Map of the Universe; 5 plays, 2 CDs, 4 Video-Poems, & 1 ballet for Ballet BC. She edited, The Spoken Word Workbook: inspiration from poets who teach.

Featured in Chatelaine Magazine, a regular on CBC, a Ted-Talker, and the subject of documentary Heart of a Poet, et cetera. Of the beat tradition, in 1989 she studied at Naropa University (Jack Kerouac School of Disembodied Poetics).