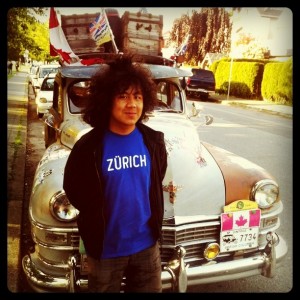 “My name is Pasang Dawa Lama Sherpa. I come from the North Eastern Himalayan region of Nepal. I grew up in a Buddhist school established by Very Venerable Khenchen Thrangu Rinpoche in Nepal to provide food, shelter and modern education for poor Himalayan children . The objective of the school is also to promote Himalayan culture and the Buddhist way of life.

I was offered with full scholarship to complete my grades 11 and 12 at the Inter-Community School of Zurich and I am currently an SFU undergraduate student enrolled in the faculty of Electronical Engineering.”

Pasang wanted to share a famous  poet from Nepal with you. He plans on writing his own soon.

A brief bio about the Poet:

Devkota has contributed to Nepali literature by bringing the Sanskrit tradition to its apex and by starting modern romantic movement in the country. Devkota was the first to begin writing epics in Nepali literature and his magnum opus “Muna-Madan” remains a best seller even fifty years after his death. He is recognized as one of the greatest Nepali writers and his work is in the same level of standard as any of the greats of literature in any language. He also served as Nepal’s Education Minister, and was a professor at Tri-Chandra College.

I see sounds,
I hear sights,
I taste smells,
I touch not heaven but things from the underworld,
things people do not believe exist,
whose shapes the world does not suspect.
Stones I see as flowers
lying water-smoothed by the water’s edge,
rocks of tender forms
in the moonlight
when the heavenly sorceress smiles at me,
putting out leaves, softening, glistening,
throbbing, they rise up like mute maniacs,
like flowers, a kind of moon-bird’s flowers.
I talk to them the way they talk to me,
a language, friend,
that can’t be written or printed or spoken,
can’t be understood, can’t be heard.
Their language comes in ripples to the moonlit Ganges banks,
ripple by ripple-
oh yes, friend! I’m crazy-
that’s just the way I am.

You’re clever, quick with words,
your exact equations are right forever and ever.
But in my arithmetic, take one from one-
and there’s still one left.
You get along with five senses,
I with a sixth.
You have a brain, friend,
I have a heart.
A rose is just a rose to you-
to me it’s Helen and Padmini.
You are forceful prose
I liquid verse.
When you freeze I melt,
When you’re clear I get muddled
and then it works the other way around.
Your world is solid,
mine vapor,
yours coarse, mine subtle.
You think a stone reality;
harsh cruelty is real for you.
I try to catch a dream,
the way you grasp the rounded truth of cold, sweet coin.
I have the sharpness of the thorn,
you of gold and diamonds.
You think the hills are mute-
I call them eloquent.
Oh yes, friend!
I’m free in my inebriation-
that’s just the way I am.

I see the blind man as the people’s guide,
the ascetic in his cave a deserter;
those who act in the theater of lies
I see as dark buffoons.
Those who fail I find successful,
and progress only backsliding.
am I squint-eyed,
Or just crazy?
Friend, I’m crazy.
Look at the withered tongues of shameless leaders,
The dance of the whores
At breaking the backbone on the people’s rights.
When the sparrow-headed newsprint spreads its black lies
In a web of falsehood
To challenge Reason-the hero in myself-
My cheeks turn red, friend,
red as molten coal.
When simple people drink dark poison with their ears
Thinking it nectar-
and right before my eyes, friend!-
then every hair on my body stands up stiff
as the Gorgon’s serpent hair-
every hair on me maddened!
When I see the tiger daring to eat the deer, friend,
or the big fish the little,
then into my rotten bones there comes
the terrible strength of the soul of Dadhichi
and tries to speak, friend,
like the stormy day crashing down from heaven with the lightning.
When man regards a man
as not a man, friend,
then my teeth grind together, all thirty-two,
top and bottom jaws,
like the teeth if Bhimasena.
And then
red with rage my eyeballs rool
round and round, with one sweep
like a lashing flame
taking in this inhuman human world.
My organs leap out of theirs frames-
uproar! Uproar!
my breathing becomes a storm,
my face distorted, my brain on fire, friend!
with a fire like those that burn beneath the sea,
like the fire that devours the forests,
frenzied, friend!
as one who would swallow the wide world raw.
Oh yes, my friend,
the beautiful chakora am I,
destroyer of the ugly,
both tender and cruel,
the bird that steals the heaven’s fire,
child of the tempest,
spew of the insane volcano,
terror incarnate.
Oh yes, friend,
my brain is whirling, whirling-
that’s just the way I am.