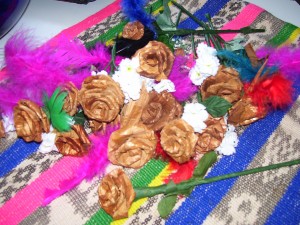 Ariadne’s Note: I would like to explain about the World Poetry Empowered Series Awards.

The word “Empowered” focuses on being the best you can be, letting go of  negative delusions   and allowing that bright light that we all have within us to grow.  Empowered creates a space for talents and insights to emerge and to share that beauty with the world. Elder Amelia Barney is one such example. We are honoured to present her here.

Ahousaht Elder Amelia Barney has created the lovely cedar flowers gifts especially for the World Poetry Canada International Peace Festival participants. Cedar weaving using the bark from the cedar tree traditionally was used for clothing, hats and blankets, being water proof and light. It played a large part in the traditional life of the people; the cedar has as much importance as the eagle. Cedar was also used for cleansing and had a strong spiritual aspect. The cedar bark is harvested with care and blessings.

Amelia has made these cedar flowers gifts with love for our World Poetry Family. We are deeply honoured to present these precious gifts to our National and International guests. They can take home a little bit of the proud Ahousaht First Nation  to remind them of the Peace Festival.

Ahousaht means people of Ahous, a small bay on the west side of Vargas Island in Clayoquot Sound. BC. Ahousaht can be translated to mean ‘people living with their backs to the land and mountains on a beach along the open sea.’ Ahousaht First Nation territory encompasses much of Clayoquot Sound with the village of Maaqtusiis (Marktosis Indian Reserve IR #15) being the only reserve or village site inhabited year-round. Ahousaht First Nation has 25 reserve sites within the nation’s territories, all accessible only by float plane or boat.

The traditional territories of the Ahousaht people are bordered by the Hesquiaht and Tlaoquiaht nations to the north and south respectively. These territories, within and beyond the Clayoquot Sound Biosphere Reserve, are home to an incredibly diverse ecosystem and a rare ancient temperate rain forest. The Ahousaht people have lived in harmony with these territories since time immemorial guided by an understanding of the Nuu-chah-nulth worldview, “Heshook-ish tsawalk” which means “everything is one.”

The traditional governance system of Ahousaht still exists today and is represented by three principle Hereditary Chiefs who are responsible to the Ahousaht people and the hahuulthi (ancestral territories and resources).

Thank you for being part of our World Poetry Family! 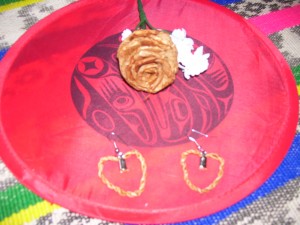