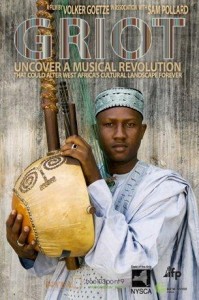 The film and a one time only special concert is coming to  the Vancouver International Film Festival. The concert is presented in association with : Griot Senegalease kora and western trumpet coming to Vancouver to a special live concert performance on Friday, Sept. 28, 9:15 pm start at the Vogue Theatre. World Poetry has one pair of tickets for the concert. The first one who sends an email to ariadnes@uniserve.com will receive two tickets to this special event. On this site we have broken a record-2,065 visitors for Tuesday! Thank you Yaman for the promotion.

Griot http://www.youtube.com/vgoetze for a preview.

Presented in association with:
Griot Senegalese kora and western trumpet … are coming Vancouver for a special live concert performance on Friday Sept. 28, 9:15pm start, at the Vogue!

This beautiful film has an impressive list of filmmakers including:
Volker Goetze. Producer/Director. Award-winning musician, composer and producer.

“A film that provides a visual feast full of beautiful images and lovely music as well as a human interest story showing the changes between the past and the present and the possibility of a combined future. The Griots are the keepers of oral wisdom, history and ancient traditions. Through the joint mediums of exquisite images and music, the film explores the changes that are now happening in the life of the West African Senegalese Griot song writer Ablaye Cissoko and the challenges facing this honoured tradition. He leads us through the necessity of maintaining the  respect and honoured traditions of the past while at the same time, engaging the international community and world music. The Griot way of life is in good hands with Ablaye Cissoko.

A short summary for the film:

GRIOT – Synopsis By tradition, griots are the living repositories of West Africaʼs oral epics — histories that are crucial for the preservation of West African social structures. Griot, a documentary by Volker Goetze, uncovers the beauty of West Africanʼs traditional past and discovers that some revolutionary changes may be afoot — changes that could alter the cultural landscape forever.

They fought Islam and won. They fought European colonialism and won. Now, after a thousand years of religious, political and cultural onslaughts, a monolith of West African culture is showing signs of change in the form of a radical new individualism. Kora virtuoso Ablaye Cissoko is our ticket inside the mysterious world of the griot. Griots today are at a crossroads between the traditional, which is increasingly irrelevant, and … something new. What could not be done in a thousand years through the competing ideals of Islam and occidental philosophies is being done by a fundamental reordering of economic opportunity.

The film captures this moment of historic change in the griot tradition, caught now, as it is, between the imperative to maintain the social structures of the past and the need to enter into a dialogue with the international comment.

Multimedia Artist Volker Goetze is a German-born, New York-based trumpeter, composer, and filmmaker. He performed and presented his work at leading venues and international festivals such as the Carnegie Hall, Kennedy Center, Merkin Hall, West German Radio Station (WDR) in Cologne, Gasteig Munich, Sunset Paris, Jazzhouse Copenhagen, World festival of Sacred Music Los Angeles and the Opera Festival in Munich. His work bridges cultures creating contemporary cross-cultural dialogs across multiple disciplines incorporating cutting edge technology. His recent compositions don’t fit in any singular category as they derive from folklore music, rock, jazz, contemporary music, classical as well as baroque music. In the recent years he has been investigating the oral culture and story telling of West Africa and their influences on Jazz and Black Culture in America. GRIOT, a feature documentary on the oral music tradition in West Africa, is Volker Goetze’s debut as a film director and has since developed into a multi media performance symphony documentary.

The film is neither a traditional western documentary, as it does not settle for a conceptual understanding of our subject; nor is it simply a performance piece, as it does not settle for collecting powerful songs. This piece celebrates the art of the Griot – the art of the praise-singer and musical healer – by expanding the narrative through an interaction of poetry, music, song, stunning visuals and earthy sounds. Our stylistic approach taps into the very essence of the healing work of Ablaye Cissoko as a musician and activist in his home country Senegal.  The approach is consonant with the life and history of Ablaye Cissoko himself. He descends from Kimitang Cissoko, the inventor of the kora, the African lute-harp. A genie directed him to build the first kora and the beautiful music he created with it lifted his people from their despair. Ablaye Cissokos music similarly has the power to heal broken people. His songs touch hearts and already reach far beyond the borders of West Africa. 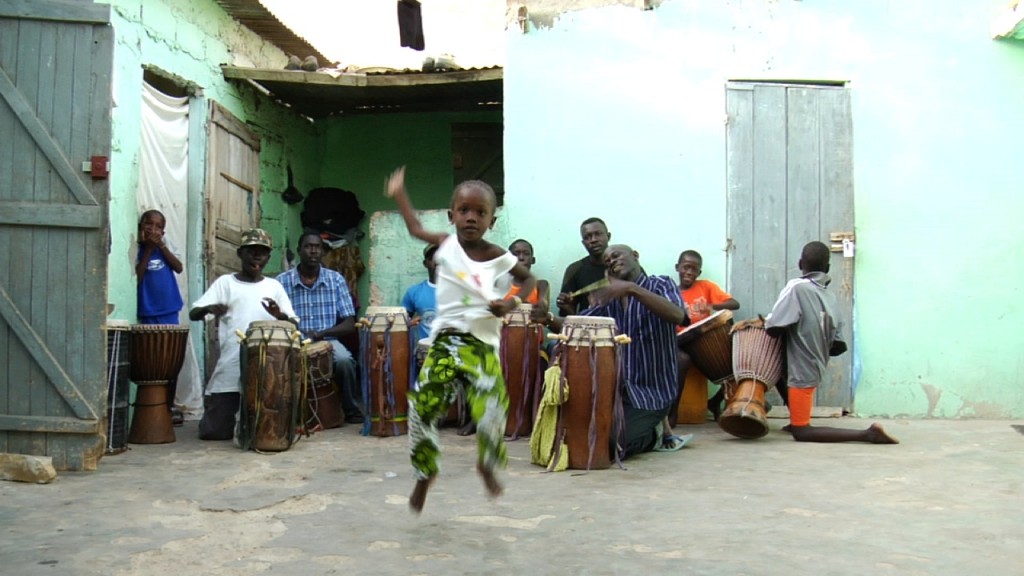 Griot , a must see film.

To find dates, locations and ticket information go to www.viff.org

A fascinating interview with Director and Producer, Volker Goetze.Due to time constraints, the interview was by e-Mail. My questions are in bold and italic. All that remains is to see the film and send your comments in!
ariadnes@uniserve.com,

To find dates, locations and ticket information go to www.viff.org

A fascinating interview with Director and Producer, Volker Goetze .Due to time constraints, the interview was by e-Mail. My questions are in bold and italic. All that remains is to see the film and send your comments in!

1)       What message/messages do you want to give to the audience?

The film is a window into the world of a Senegalese Mandinka Jeli (Griot) and musician Ablaye Cissoko.  Through the film, Ablaye acts as a storyteller and mediator. His stories are very different from the ones we normally hear in the western world. They address lost and often forgotten values of family, friendship, respect and compassion. Ablaye is descended from generations of Cissokos and they are famous for inventing the African harp otherwise known as the kora.

Go see the film to get a glimpse of the oral tradition and living history of West Africa, get uplifted by Ablaye’s music, understand what the youth in Senegal are going through; and gain a better understanding of the connection of oral memory to Black Culture.

3)       You have high profile and experienced film partners. Why did they join your team?

Working with Ablaye Cissoko, I discovered and learned more about the Griot culture and oral history of West Africa. I wanted to share this discovery and the idea of a documentary was born. In 2007, I read a book called “Documentary Storytelling” by Sheila Curran Banard, which introduced me to Sam Pollard, known for his many collaborations with Spike Lee. It mentioned that Spike Lee often just left the footage to Mr. Pollard and let him work out the story creatively, by looking at the footage itself. It was right then and there that I realized that Sam Pollard would be an excellent collaborator for this film. I thought he might be interested because of the nature of the topic. But it was not until two years later that a colleague Bob Mover, who worked with Charles Mingus and Chet Baker, mentioned to me that he actually knew someone who could connect me with Sam Pollard. After the first meeting with Sam and his former mentor Victor Kanefsky, I found out that Sam is a huge fan of jazz-legend and pianist Randy Weston, who we interviewed for the film. Randy Weston has lived in Africa for fifteen years and Ablaye Cissoko and Randy Weston actually met in 2007 at the Saint-Louis-Jazz-Festival in Senegal. Sam Pollard mentioned that if I set up a meeting with Randy Weston that he would be on board. So I set up a meeting and Sam Pollard joined the team together with Victor Kanefsky. Sam and Victor proved to be invaluable additions to the team. I also have to mention Sanne Kurz– a fantastic cinematographer from Munich. She was hard working and provided the fantastic images. I have so many people to thank including writer Leslie Mulkey, historian Prof. Mamadou Diouf, and editor Marie Planqouis. Documentary films are made by the labor of love and it was a dream come true to work with Sam Pollard and Victor Kanefsky.

5)       The visuals and the music are stunning. How did the producers achieve this?

Again it was the craft of cinematographer Sanne Kurz. She is a school colleague of a close friend of mine who has won prizes for best cinematography in Europe. She loves films and she prefers to work on films with artistic merit turning down commercial offers. We worked as a two person team: she did the filming and I did the sound as I had experience in mobile recording. When Ablaye and I listened to our first recordings in 2007, which can be heard on the CD “Sira” (Motéma Music), we could not believe it – it felt that someone else is playing, we were actually shocked. So I was never worried about the music, I just hoped that the film would be strong enough to carry the music.

What do you want to say about the film?

As with my music I don’t feel comfortable talking about my work. Go see it once, twice… I hope that we achieved a complex and rich film, which will speak to the audience differently each time they watch it. I hope it will evoke deep emotions, heal and if it touches a fraction of the experience of a living piece similar to the oral memory of West Africa all goals would be achieved.

What would Ablaye Cissoko want to tell the readers of the TAN the Afro News?

I just reached him and this is what he said:

“All I as a griot do is sing and play. Whenever I get a chance to perform- I feel honored and the transmission of the Griot culture is done. That is my role.”

I would like to thank Volker Goetze , Ablaye  Cissoko, The Vancouver International Film Festival, Helen Yaki and above all our esteemed publisher and editor Honore Gbedze. Thank you for doing so much in such a short time period. It was a real team effort.

1 thought on “World Poetry Proudly Presents “Griot”, an interview with the Stars and Director on the Radio!”