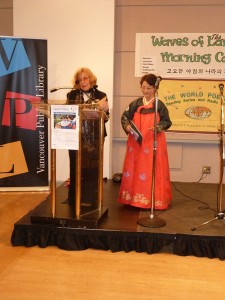 A truely wonderful celebration of Korean culture was celebrated by World Poetry and co-sponsored by the Korean Traditional Art Society was presented by the Vancouver Public Library, Central Branch in Vancouver,BC, Canada.on October 15th, 7-8:30 pm.

Interesting poetry in Korean and in English was presented by several poets from the Korean community and from World Poetry. The poets were selected by Bong Ja and included: Jacqueline Maire, Anita Aguires Nieveras and Bernice Lever among others.

The evening was highlighted by traditional dance and music featuring the Felice Woman’s Choir and the Shin-Myung Korean Drum Group.

A great evening was had by all. Newspaper estimates placed attendance at 150.

World Poetry would like to thank Bong Ja for organizing and hosting such a special event and the Vancouver Public Library for presenting us.