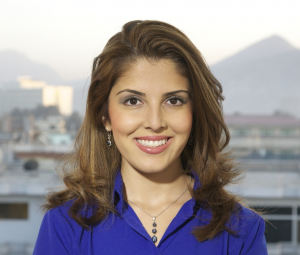 World Poetry would like to congratulate Atia for her nomination and her hard work bringing the voices of Afghanistan to the world. We also wish her all success with her upcoming novel.

Atia Abawi is an international correspondent and Afghanistan bureau chief for NBC News, joining the network in 2010.  She arrived in Afghanistan in 2008 where she started up the CNN operations in the country as the network’s full-time correspondent in country.  She has won several awards including a Peabody.

Abawi has travelled extensively throughout the world covering stories in Afghanistan, Iraq, Egypt, Pakistan, Myanmar, Britain and the United States.  She has interviewed world and military leaders, including Afghan President Hamid Karzai, General David Petraeus and General Stanley McChrystal, among others.

Her first book will be published by Penguin Group in 2014, a young adult novel about forbidden love in Afghanistan.

Abawi started her career at CTV in Largo, Maryland as a freelance reporter covering local news.

“I was born in Germany after my family fled the Soviet invasion in Afghanistan when my mother was 8-months pregnant.  At the age of one we moved to Virginia in the United States where I was raised. My parents sent me to an Afghan school once a week while growing up.  They also instilled a strong pride for my motherland, its culture and its people.  I attended Virginia Tech and received a degree in both journalism and international studies.  It was a personal goal of mine as a child to go back to Afghanistan as a journalist and share the voices of its people.  After more than four-years of living there I have tried my best to share the stories and voices of those we don’t often hear from in an attempt to help.  I don’t know if I have helped at all but I do know that I have given all of myself in trying.”