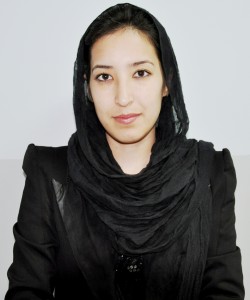 Ariadne’s note:  Sajia  has been nominated to receive a World Poetry  Empowered Humanitarian Film Award at the World Poetry Canada International Festival  April 4-30 at UBC  for her work with various organizations, support and training of Afghan women and her commitment to peace. A first time director, her film the Broken Voices of Poetry has great beauty,  powerful, poetry and drama. We look forward to showing the premiere of this strong film and meeting her at the World Poetry Canada International Festival, visa dependant.

Here is her biography:

“I am Sajia Hussain Azmat, born in 1985 in Kabul, Afghanistan and I am 27 years old, I have been living in my beloved country Afghanistan since 2001 and before that I was immigrant in Pakistan.

I completed my primary education in Pakistan, but Higher Education in Afghanistan, I have worked for 6 years in two Banks, such as Azizi Bank as a General Manager of the Dasht e Barchi Branch and Deputy General Manager of the Main Office at Afghan United Bank, but right now working in Afghan Wireless Communication Company (AWCC) as an Executive Office for Managing Director.

The only problem that Afghan women currently have in Afghan community is a lack of education puts Afghan women at a  disadvantage. This is why they are unable to work together with Afghan men, it gives them much pain. Now we have to put our hands together to work in this matter in order to find the solution for the current problems.

In order to have a great relationship with Universal Women, I began to work in a community organization which has activities in the neighbouring countries during the time of Afghan Immigrant and were supporting the Afghan Women in the matter of Cooking Schools, Domestic Tailoring skills etc. This helps to  establish  a long term work environment for the Afghan Women and Girls. This Cooking School is providing jobs for the women and girls after their graduation in the private and government organizations, which establish possibilities for the Afghan Women and Girls even for tourism and to share the culture of both Afghan Foods and Clothes. This organization is trying to make the Afghan Local Foods famous in all provinces of Afghanistan in the coming future. The organization has been established with the private assets and capitals with non-government support, which is a good step toward the reconstruction and rebuilding of Afghanistan.

To summarize, the goal for establishing of the Cooking School in Afghanistan and Voice of Afghan Girl and Women is a bridge to the world, it will establish the exchanging of their ideas and thoughts in the society.”