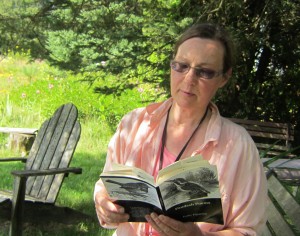 Kathy Figueroa is a Canadian, poet, photographer, and freelance writer.  Born in a small town in a mountainous region of southern British Columbia, she has resided in Ontario for many years and currently lives in the Bancroft area, which is known as “Cottage Country.” 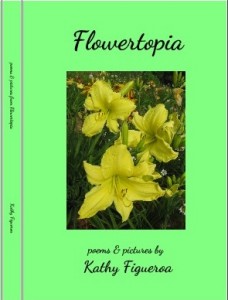 As of early 2014, two collections of her poetry, “Paudash Poems” (2012), and “Flowertopia” (2014), have been published by Brian Wrixon Books.  In 2012, she also produced nine small collections of poetry in chapbook form, as well as one short play.  Newspaper readers in and around Bancroft have been familiar with her articles since early 2004 and have been regularly entertained by her often humorous, old-fashioned style of verse ever since the day her first submitted poem, “Springtime In Paudash,” graced the pages of The Bancroft Times newspaper, back in May, 2006.  Kathy’s work has also appeared in numerous other publications, both print and online, locally, nationally, and internationally.  To date, her                                                                 poems  have been included in twenty poet anthologies. 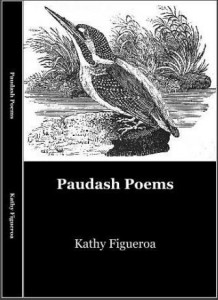 Keenly interested in promoting local culture, Kathy has been actively organizing different events featuring poetry and often music, including a monthly group for poetry, short story, and theatrical play enthusiasts.  Harkening back to the days of the pioneers, when the recitation of poems served as entertainment at social events, Kathy enjoys staging public poetry readings and often entertains the folks at a local seniors’ retirement home.

When not engaged in literary pursuits, Kathy likes to spend time working in and photographing her extensive flower gardens.  This latter endeavor has resulted in many of the photographs accompanying the poems in her most recent book, “Flowertopia.”  Cycling, hiking, and spending time outdoors, in general, are among her favourite pastimes.  Links to some online examples of her work can be found on her blog:  http://kathyfigueroapoetry.blogspot.ca/ and she can be contacted by e-mail at:  flowertopia.studio@gmail.com 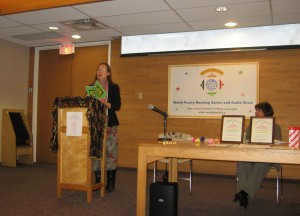 A LIGHT IN THE SKY

As I stood and gazed at the nighttime sky,

A sputnik, a satellite, caught my eye.

It travelled in a slow and graceful arc;

A small and bright point of light in the dark.

Spellbound and transfixed I watched it with awe

And marvelled at the wondrous sight I saw.

Traversing the sky, so high in the air.

Then, as eastward, through the heavens it flew,

The roof of my house obscured it from view

When, at last, it was hidden from my sigh

Nothing else broke the stillness of the night.

As the beauty of the sky wove its spell

Into a dreamlike reverie I fell.

I basked in the radiance of each star,

The twinkling light from so very far.

I turned to look where the satellite passed,

Where, high over my roof, I saw it last.

Then nearly fell over from sudden fright

When, once more I spotted that satellite!

It crested the roof from the other side!

With ease, through the air, it appeared to glide

And it seemed to be coming ..straight at me

I thought, “Yikes!  How could this possibly be?”

I was enveloped by a wave of fear.

As I stared at the strange light drawing near.

My heart raced, my mind reeled, I thought “Oh, no

This must be some type of small U.F.O.!”

As though in a dream, no longer awake,

I pondered what sort of action to take.

But the light veered away and flew on by