Ariadne’s notes: The World Poetry Café Radio Show with hosts Ariadne Sawyer and Anita Aguirre Nieveras welcome the amazing and talented twelve year old, poet, artist and author Angel Berry!  A fascinating interview with Angel telling about her life, her work and hopes for the future. She also read from her new children’s book, the Clouds, co-written by Andrew Lane with beautiful illustrations by Bangladesh illustrator Shubhangi Raheja . CLICK HERE To LISTEN TO THE SHOW!

Music by Enrico Renz and a recording of Angel Barry. To give it added spice, there were  a couple of phone glitches but things improved with the talented hand of tech Israel Mota. 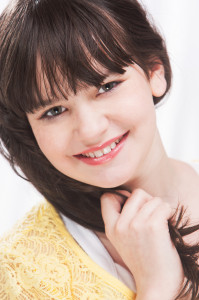 Twelve year old, Angel Berryis no stranger to success and has already accomplished more than most adults. In April 2014, she wrote published a children’s book called “Ladybug” which was chosen by Scott Baio to be included for a fundraiser for the Bailey Baio Angel Foundation.  Angel was born in Calgary, Alberta in Canada in 2002. She grew up always creating; Angel knew, from a very early age, that she would pursue a path of acting.  “It’s been a dream of mine for as long as I can remember.

Angel’s first passion is acting. She was nominated and walked the red carpet for her “Best Performance” nomination for her starring role in “Anna’s Wish” along with Max Burkholder (Parenthood), Abigail Hargrove (World War Z) and Callan McAuliffe (The Great Gatsby) at the Young Artist Awards 2014

Angel, who has already made a name for herself, starring in a film “Cry From Within” which was screened at Cannes Film Festival in May 2014, was feted for her standout achievement as a actress in the short film, “Anna’s Wish.”  “Anna’s Wish” was featured at the Calgary Underground Film Festival in 2013 and was recognized for superior acting performances.  View the trailer for Anna’s Wish here.  https://www.youtube.com/watch?v=ItEe7VTSOgQ&hd=1

Referred to as the Oscar Awards for kids, the Young Artist Awards have honored and jump started careers of other famous young actors including Drew Barrymore, Jason Bateman and Jackie Coogan.

In 2013, Angel caught the attention of multi-platinum music producer, Andrew Lane, who immediately signed her.  Angel partnered with him to co-write and produce a CD, entitled “Reflections by Angel,” of the spoken word genre based upon her poems.  The CD is being considered for a 2015 Grammy nomination. In August 2013, Angel and Lane collaborated on a song dedicated to those who suffered from damage sustained in the recent tsunami in the Philippines. The song is called “Strong.”  Additionally, her music video “Today I Learned” has garnered over 40,000 views on YouTube in just a few short months.  Angel recently appeared on CityTV Calgary to promote her books and her spoken word debut CD release later in 2014 and was also the cover of Avant Garde Magazine in February 2014.   Angel hopes the message of “Reflections by Angel” will transcend and inspire other kids to realize they are empowered and to have the courage to follow their dreams.

Music videos for “Today I Learned” and “No Matter” can be viewed at www.youtube.com/user/AngelBOnline.  Music videos to accompany her two books, “Clouds” and “Ladybug,” will be on YouTube in September 2014.  Her songs are available on iTunes and MTV.

Angel was invited to be a guest panelist for the “When Words Collide” event/workshops for upcoming and developing authors.  She is the youngest author ever invited.  www.WhenWordsCollide.org

She can also add journalist to her resume.  Angel landed a reporter gig with the illustrious KidzHub Network.  KidzHub is a selective program for kids from all nations to have a voice and spread a positive message in a fun and entertaining way.  Angel auditioned in July 2014 with KidzHub founder, Orlando Dillon, who invited her to officially join as a “hubber.”  Angel’s first reporting assignment was Saturday, August 9, 2014 for the live International Summer Broadcast Series 2014.  More info can be found at www.KidzHub.com.

Angel is also heavily involved in philanthropic projects.  She recently partnered with “The Hope For The World Foundation” which provides medical and surgical treatment and assistance to impoverished individuals in the Philippines and Tecate, Mexico.  More information is available at www.hopefound.co.