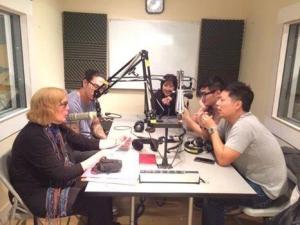 A fascinating conversation about the making of films, challenges and hope and plans for the future ensued with the talented filmmakers Theo Kim and Vulcan Siu . Also in the group was Grace Chin, Festival Director who spoke about the VAFF exciting upcoming festival and Regina. Also featured was Professor Bodhirupa Sinha from India who is doing a seminar in Vancouver on Tagore and education. She read a lovely poem that embodied  the philosophy of Tagore both for learning and women’s rights.

VAFF films to be shown at the the World Poetry Canada Peace and Human Rights Festival at 5:00 pm:

Stick with You | Director/Writer, Vulcan Siu | Producer, Felix Chow & Vincent Tai After a heavy drinking party, a college student, Ian, decides to drive back to the dorm – with unforeseen consequences.

#YELLOWMAN | Director, Theo Kim | Producer, Phil Planta #YELLOWMAN is a superhero comedy about a brilliant scientist, who, after a life changing antimatter experiment, wants to make the world a better place by becoming the world’s first superhero. This becomes increasingly difficult because of power, money and instant fame from over exposure via social media.

The story of two people discovering a town where a scientific experiment has gone horribly wrong.

*The above films are part of a 24 hour video feed and display at the Irving Barber Learning Centre at UBC until October 27th.

Some of the filmmakers will be in attendance for Q & A.

Come to the free film festival!