Ariadne’s Notes: We are honoured to present  the poet and author Kadrush Radogosh originally from Albania. He will also be on the World Poetry Café Radio Show later on. Sorry for the long waiting list, I try to  post in the order that each entry has come in. 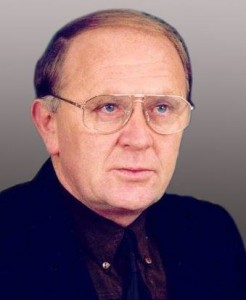 An award-winning Albanian poet, novelist, play-writer, and literary critic from Kosovo1 Kadrush Radogoshi was born in Gjakova (a city in the Western Kosova). He completed the primary school, the secondary school and the Teachers’ College in Gjakova, whereas the Faculty of Philosophy in Prishtina, where he also completed the postgraduate studies and received the Master of Arts in literature.

drama, essays, and literary criticism. He has published in Albanian: 9 poetry collections

(last one bilingual:English – Albanian), 4 books of literary criticism, 2 novels, a play and a nonfiction book.

Kadrush Radogoshi taught literature until September 1, 2010, when he emigrated to Canada along with his family.   .

Radogoshi was selected as a member of Borderlines Writer Circle 2013-2014, through which he appeard as a part at LitFest 2013. He is also a member of Writers Guild of Alberta, and as a member of Stroll of Poets he appeard at “Poets at Haven” as a featured poet on November 18,2013 and  at this years Edmonton Poetry Festival. NorQuest College website published an article about him in November 2013, and Edmonton Journal  on November 15,2013 published one page kolumn about him. His poems have been included in several anthologies in Albanian, Swedish, Romanian and English. The poem“I washed Your Ardent Eyes With Dew” have been included at Stroll of Poets Anthology 2014, page 75, also his poem “I Want to Create a World without Golgotha” have been included at Intercontinental Anthology of Poetry on Universal Peace 2014 (Editor for North America Kathy Figueroa).

His books have been comented upon and have been the subject of literary criticism by several literary critics, writers and scholars of literature, among them are: Michael Hingston, Richard Davies, Ph.Dr.Pajazit Nushi, Ph. Dr. Arben Hoxha, H.Salihu, A.Konushevci, R.Ramabaja, K.Rexha, Vasil Vasili, Prend Buzhala, Pal Ndrecaj etc. .

Kadrush Radogoshi in his works in poetry, prose, drama, critics and literary studies was led by the modern historic conscience. Therefore, with the attitude and vision against the world, he belongs to those writers who their literary creativeness, as Sartre says, put into the “service of freedom”. Radogoshi does not consider the imaginative literary creativeness as a “game”, therefore he does not concept the literary critics as a “decoration”, but as an intellectual activity with an important social function through which it is influenced on the creation of literary models and creation of the horison of esthetic waiting, which means the raise of receptive level of readers.

This author is distinguished from other writers by the cultivation of a quite original expression, which is characterized an endeepened erudite dimension either from mythology, or from history in special, either from culture and knowledge in geneeral. Same as Baudelaire, who through the esthetism of evil and ugly gave the contures of a real modernist French literature, also Kadrush Radogoshi, poetzing in most cases the ugly and the inhuman proves that also the Albanian poetry may have a dignant forerunner of a new literature after the change of ideologic model. The novelist Kadrush Radogoshi aims perfectness of a work of art, therefore he relativizes the existing standards in prose and is provoked by the tabu topics in a totalitarian society, whose treatment widens  the spaciousness of the literary expression. In the novels of this author the epochs, histories, heroes, antiheroes, the virtuous, the meskins, the good, the hypocrites, the wise ones, the stunned, the brave, the cowards, that is all that flow of generations of a collectivity, which builds the research  of an enigma of survival as a supreme value of his novels.

Aiming at great wisdom or the semantic of the other bank as he calls it, this author wishes to join the minds of the third millenium who wish to find the path of illumination and solution of many secrets of the literary creativeness and of human existence

They may be blue as the sea,

Where the wounding nymph

With her terribly beautiful look swims,

And where the God of Waters

The banks in love with the blue.

They may be as the sky,

Where in daylight the sun shines

And birds and butterflies fly, which

Do not recognize barbed wires, while

At night millions of stars shine

With the permanent harmony of light

And the moon, once full as

The Eurydice’s face, once new

As a magic eyebrow over her eye,

In the water of the eye of ugliness.

They may be green as the vistas

Of a painter in the spring with

Millions of fragrant flowers, through which

Millions of bees collect the nectar

To make the honey by which

The lips of Eurydice are sweetened,

Before the dew falls on them.

The eyes of love

Are gates of heaven?

The secret code of opening.

Sound has eyes. I can see

The word when it is born.

The word has eyes. I can see

The great sun of thought,

But also the deep abyss of despair, where

The teardrop rolls down,

Onto the face of Eurydice.

That pain has eyes.

They can see the joy

Dressed in a purple gown

On the romantic corner of the horizon,

Beyond bars, beyond barbed wires…

Eyes happen to be

The written poetry on

The unkissed forehead of Eurydice

And the lips of an actor reciting it

With a borrowed beak of a nightingale,

Or with the voice of White River, springing

From the heart of the Mountains, unjustly cursed.

The eyes happen to be eyes,

I do not know it exactly…