Ariadne’s Notes! An exciting, beautiful show full of music and poetry featuring the lovely Laura Kelsey plus two songs of Don Amero created a wonderful and fun filled show. Also we welcomed Victor Schwartzman who was an operator in Training under the careful eye of Gerry.

For all the fans from around the world that love to listen to Laura : CLICK HERE! 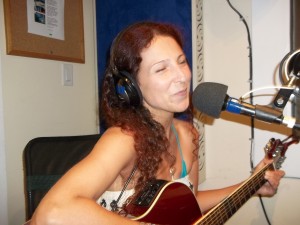 Songs written by and featuring Laura have played on Canadian, American and British radio stations. “Earth,” a folk/rock song co-written with guitarist Murray Howes, was a finalist in a nation-wide contest; in 2007, Laura organized and produced an album of death/black metal after fronting bands in Vancouver, BC.

In 2011, Laura co-wrote “Run Outta Road,” which was featured in the Province newspaper; the single was recorded at Armoury Studios in West Vancouver and a music video by HunCity Productions was released at the South Cariboo Theatre. She continues to write, release and perform songs by herself or with bands.

Songs can be downloaded here: http://www.reverbnation.com/laurakelsey

Pomegranates are Hard to Eat

One by one, like tiny red teeth
iridescent with white roots
planted in the sour meat of the fruit.
Bunched, clusters of salmon eggs
jelly surrounding the crunchy little bones
of the baby fish.

So much work,
you complain too much
but worth every moment
I add.
My scarlet-stained fingers have to peel
nails digging
juice sprayed across my face like blood.

What is that fruit’s carbon footprint?
so skeptical.
I throw it to the ground, skin imprinting earth.
About the size of a pomegranate

I reply.
You leave
I am left eating the seeds. 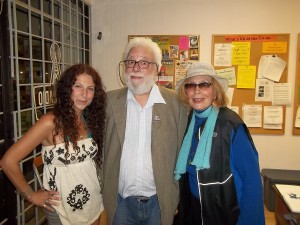