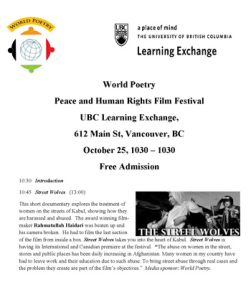 (Click here to print a copy of the program)

This short documentary explores the treatment of women on the streets of Kabul, showing how they are harassed and abused.  The award winning film-maker Rahmatullah Haidari was beaten up and his camera broken.  He had to film the last section of the film from inside a box. Street Wolves takes you into the heart of Kabul.  Street Wolves is having its International and Canadian premiere at the festival.  “The abuse on women in the street, stores and public places has been daily increasing in Afghanistan. Many women in my country have had to leave work and their education due to such abuse. To bring street abuse through real cases and the problem they create are part of the film’s objectives.”  Media sponsor: World Poetry.

The Unknown is the second short film by Abdul Ghafar Faizyar which focuses on the psychological pressures faced by Afghanis today.  He was born and lives in Afghanistan.  Currently he is the local cinematographer for HIP HOP KABUL, a documentary project in Afghanistan.  This intense drama centers on a woman journalist in Kabul.  The foreign military is scheduled to leave and she is terrified the city will be invaded and many people will be killed.  With two small children and a husband with a disability, she searches for ways to create a safe nest in the middle of the horror of this war.  His many other films have won numerous awards.  The Unknown has been screened in many festivals, with Leena Alam winning awards as Best Actress.

This film tells of the water situation in one part of Afghanistan. The people of Nimrooz are desperate for water.  Their own supplies have run out and they must import water from Iran.  This remarkable documentary, by Sharif Saedi, tells their story

Adisa ‘AJA’ Andwele is a Barbadian-born performance poet.  In 2002 he was inspired to transform his poetry from the page and stage into practical humanitarian initiatives.  He began a journey to poverty-stricken and conflict-torn areas, capturing his experiences through photographs and video.  AJA: The Journey is a documentary capturing what he saw in Rio de Janeiro, Johannesburg, Free Town, Port-a-Prince, Kingston and Jerusalem.  The film is a fascinating look at places the media rarely shows us.

A chance purchase in a garage sale turns into a fascinating detective story in this film by Kagan Goh.  The purchase was a photo album, possibly from as far back as the 1930s, of a Japanese family.  Who were these people?  What happened to them?  Are any of them alive today?  The search for the answers leads to a striking look into what the lives of Japanese Canadians in the late 1930’s and 1940’s living in British Columbia just before and during World War Two.  At the center of the story is a remarkable young woman whose life is revealed.  The documentary features interviews with surviving members of the extended family.

These two remarkable short films by Akshat Ajay Sharma from India document the lives of two men who have disabilities.

The Daring Tourist is based on the extraordinary life of Shri Kuldeep Singh Kartar Singh Rathod.  He is a  specially abled person with polio.  This Iron Man has traveled across the country on his tricycle, fighting with State Governments (irrespective of the political party) for the Pension Act for Senior Citizens, Widows and Physically Challenged Citizens.

Zindagaani—A Story Untold is an award-winning film which has been featured by many newspapers and websites.  A very short film about a man who lost one arm and is far more than a survivor.

Una Bruhns was born and grew up in Johannesburg South Africa.  She became involved in the movement against the apartheid government and eventually had to flee to Canada.  She could not return for thirteen years, until Nelson Mandela helped achieve the downfall of that government and system.  She has created Farewell Nelson Mandela as a tribute to that great man, and to remind future generations that what they enjoy today has come with a heavy price of lives and families torn apart.  Peace Poetathon was created in an endeavour to bring peace to the world by connecting nationalities through the arts.

Peace Poem was created by Ariadne Sawyer as one of the short capsules that was played on radio stations across Canada in  the Brain Bulletin Series, an award willing series  in an endeavour to bring peace to the world by connecting  nationalities through the arts.  It has also been sent to the International Space Station as well to various dignitaries around the world in an effort to promote learning, creating and maintaining peace. It was performed by World Poetry participants in a video recorded by Kirk Moses, at Trout Lake in Vancouver, BC

Mary Fowles co-directed and co-wrote Taxi Casablanca with Hind Benchekroun.  Fowles thought of this film after meeting Morocco’s first and only female taxi driver.  Zakia drives an old Mercedes with up to seven passengers at a time, part of a group of drivers known for speed.  An intimate portrait of a modern-day pioneer, the film offers a unique glimpse into a society struggling between progress and old traditions.  See her clients and hear their remarkable stories!  She lived in Casablanca for one year while writing for a news magazine, then returned to create her first feature film.  Taxi Casablanca has been made in honour of Zakia’s life.

The Island of Shadows is a documentary with dramatic segments from director Erik Paulsson.  The D’Arcy Island Leper Colony was located on an island off the coast of British Columbia.  It became the forced home of people who contracted leprosy—specifically, Chinese people, for whom no government wanted to take responsibility.  This remarkable film, made in 2000, combines a wide variety of elements to tell the story of the D’Arcy Island Leper Colony from its inception in 1891 to its closing in 1924, and the appalling situation the people were forced to endure.