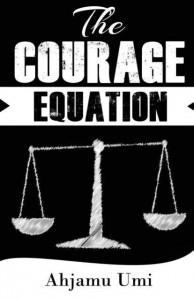 Due to a death in his family, activist Ahjamu Um was unable to come. Our love and prayers go out to him in this time of need and support. We hope he can come at a later date.

Writer on Tour from Portland, Oregon. Author/activist Ahjamu Um with The Courage Equation!

Listen to the World Poetry radio show interview with Ahjami on June 9th, 9 pm on CFRO, 100.5 fm. * Author and poet Roger Blenman was able to fill in for him on the show.

Unfortunately the launch was also cancelled.

On December 10, 2014, Raider International Publishing House in New York, NY, released The Courage Equation. This 542 page literary fiction piece is an extremely creative and clever narrative centered on issues of white supremacy and patriarchy with a suspense filled story-line.

The adventure is told through the eyes of Boahinmaa Omawale. She and her husband Adisa organize a group of activists from Accra, Ghana, and the San Francisco, Bay Area, to unite to carry out a clandestine seek and destroy mission against the leaders of a violent white supremacist group in Oregon after a growing number of young Black boys start turning up missing.

The power of this book is in its courage in addressing the elephant in the room in oppressed communities and social justice movements; the role of patriarchy in subjugating the women in those communities and movements. Boahinmaa and the other women in this story address sexism from their male comrades during the mission, and other critical issues such as rape culture, in head on and thoughtful ways that give all of us reasons to rethink and challenge how we understand those issues. In addition, a unique aspect of this story is the positive way in which Africa is represented. Strong women and men in Ghana, who are focused on self-determination and independence, are the foundation of the community Boahinmaa and Adisa live in. Boahinmaa, as a white woman in an interracial relationship who lives in Africa, gives perspective on how to exist within an African organization in a healthy and productive way. Plus, her honest and intimate interactions with Black women provide classic insight into those relationships that are rarely explored in literature and popular culture. Finally, the group’s bold decision to unapologetically fight fire with fire is an urgent departure from the dominant narrative that oppressed communities must always suffer silently or at least non-violently.

The Courage Equation is the second novel published by author/activist Ahjamu Umi. The book can be purchased through all online book sites and by order through any bookstore. More information about the dynamic activist work by the author, including information on his activist and literary workshops, can be found through his website at www.abetterworld.me

A wonderful light in the world!