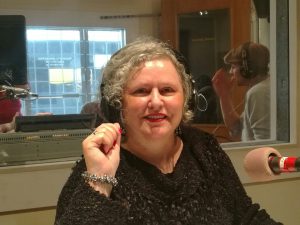 Ariadne’s notes: We were so pleased to welcome Carla Evans,  a talented poet and new World Poetry member to the World Poetry Café Radio Show on April 28th, (CFRO 100.5 FM) Due to so many needing to come into the show or call in, I have chosen to feature each of the three guests individually. CLICK HERE to listen to the radio show ! 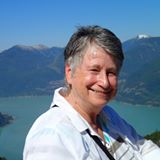 Carla Evans has been writing in a variety of genres most of her life, mainly for enjoyment. She is a retired Elementary School teacher, librarian and counsellor, having had a variety of jobs before those years.  Carla has written two educational books in the nineties, entitled, “Developing with PhotoWorks; Fun, Fantasy, Thoughtfulness, Future”, and “PhotoLinks: the Picture Connection”, both published by Lugus Productions, Ltd.  Recently, her poem, “People Streams” was published in India, in an Anthology entitled,  “XX1 Century World Literature” by IICA Inter Continental. Some of her poems have also been published in RCLAS e-zine, in the last two years. Carla has a large, active family that keeps her happily busy and writing when not housekeeping, gardening, reading, walking, visiting friends, and sometimes traveling.

One sunny day when

A lovely mother smiled at me

along the river walk

She asked about the meaning

of a large mysterious art

“What really is that?” Shy, she asked

But soon tears welled within

The t.v.news so worries me

though I’ve been here quite long

My son, well, he is ten right now

I worry so for him”

Her English was quite fine just then

“But I’m so scared of danger now!

Will this scare ever end?”

“I hope so and expect it will”

I soothed this mother kind

Yet deep inside my wishes were

To tell her more, in time

We chatted and exchanged first names

I let her know some art group names

She added them to phone

We thought for sure we’d meet again

I taped it on my desk at home

And noticed calls within

That echoed waves of river tides

Where seeds of purpose stirred

We parted from the river shore

Then once again Fear spoke to me

I’d seen the young man once

Along the walk, we’d said hello,

Then there he was again

He’d run behind my steadfast walk

And stopped me just to chat

He said it still takes time:

He can’t believe that in our town

there’s nothing quite so great

Back home in place, Afghanistan

He’d worked inside an office then

but windows made him cringe

Yet here, no worry for the worst

No guns, nor hollers, threats from guards

Or fear of unknown prison charge

For nothing ever clear, but fear

Back home were flowers in the Spring

and beauteous seasons too

They could no longer be enjoyed

He loved what grew here true

He said in disbelief

“Is work real hard, not break the law

and live your life with joy

needs happen soon for all

So keep your friendly ways and learn

I’ll come again, but not sure when

I hope to see you then”

We walked together to the spot

Pronounced each other’s names a while

But since, I’ve missed his friendly smile

I’ve not seen him again

Along the river, near our town

The worries of the young

Have left a mark upon my soul

And tied me closer to heart’s goal

To walk along more rivers far

Use words to open hearts

And people all, live free 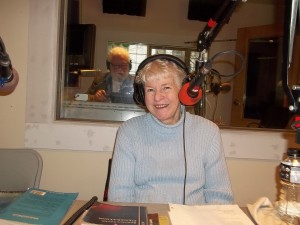 Ariadne’s Notes; The World Poetry Café with host and producer, Ariadne Sawyer and co-host Neall Ryon with super tech Victor, were honoured to welcome the award winning poet and author, Bernice Lever to the show on December 10th, at 1PM Pacific Standard Time  on CFRO 105.FM .A fascinating show with e-questions, poems , insights on peace, Poetic News and more! CLICK HERE to listen to the show! Music by Enrico Renz and Ablaye . First gift peace poem by Wida Tausif, one of 800 divided up between four poets for the World Poetry Canada International upcoming Exhibit at UBC.

Bernice Lever, born 1936 in Smithers, BC, was a founding editor of WAVES, literary magazine, York U., from 1972-1987 and has published nine poetry books, (Red Letter Day, Black Moss, 2014),  a teaching CD: The Colour of Words. She’s active  in  Canadian Authors, League of Canadian Poets, Federation of BC Writers, etc.  She reads poems, (some prize winners), across Canada, USA  and abroad. She has won five Lifetime Achievement awards as well as the Allan Sangster Award. Also she was named #1 Comedy Writer at Whistler Writers Festival , Comedy Quickies” event, October 15, 2015.

Each PEACE poem is a dry speck until spring rains,

then an acceptance flows, then a shell cracks,

until one root begins to stretch and multiply —

so roots flourish more and more —

to coax this first stem to burst up,

to subdivide again and again —

Each Peace song that sings,

again and again until many voices

Each PEACE prayer, one recites

in private or in parliament,

of all colours to bloom,

to inoculate the world,