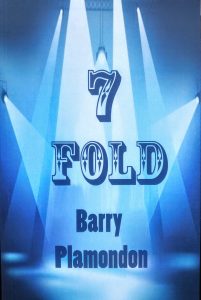 Ariadne’s Notes: Special Book Launch for the talented and prolific poet Barry Plamonom , Jan 17, 1-2 pm PST on the World Poetry Café Radio Show, CFRO 100.5 FM  now in its 21st year of being on the air. His 7th book  7 Fold by Silver Bow Press  was full of meaningful poems and in a fascinating interview , he said that his hearing senses and compassion had increased dramatically since his two strokes.  He also read some cowboy poems and talked about the Oregon trail which brought back stories from my grandmother about her great , great grandmother that walked the Oregon Train when she was 8 and refused to be giving a ride by her family in their wagon. When I had polio and was learning how to walk that story motivated me to keep on trying despite everyone telling me I would never walk again.

LISTEN TO THIS  GREAT SHOW HERE! 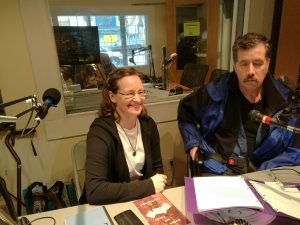 Photo: Barry and his lovely wife at a previous World Poetry Radio show.

“I was born in Penticton and
grew up in Vancouver. After high school I attended both U.B.C. and B.C.I.T.before obtaining a diploma in Practical 22Horticulture.I then worked for 20yrs. as a landscaper before2 strokes ended my career. After spending a yearin various hospitals and care homes I came home to find that I didn’t knowwhat to do with myself. I started writing poetry. There were many failuresbefore I wrote one about my daughter that I was proud of. It was like alight had been turned on,55 years of living just came pouring out onto thepages and I haven’t stopped yet. I self-published my first book “Thisn ‘That. Bric a Brace in Mar. 2016 and followed that with” Crackers and Crumbs” in Oct. This effort was published by Silver Bow Publishing. I am now on my 7th book.

I have resided in Maple Ridge with my wife and seven children for many years. I am proud to be a member of the Holy Wow Poets here. My hobbies and interests include hockey, gardening and listening to music. I did play the guitar for 30 years, but no longer. I also have a keen interest in nature, especially birds and plants. All these interests are reflected in my poetry as well as children and disability issues and sometimes a love poem or two. I have also written quite a few Cowboy poems The following is a fairly recent poem I have written entitled Ripples:

There is a ripple on the pond from the stone I cast. It is strong but cannot last. Only long enough to set the next one in motion. Together they would never cross the ocean. But they can lead by example.

Just a small sample. Of how things could go for people too. If each
said a simple “How do you do?”. To the strangers that they meet. At work or on the street. And if each in turn would pass it on. Maybe one day all hatred would be gone.

Barry wrote: “Hi Ariadne, here is the poem I just read on the radio show, The Old Tree. As well here is the second poem about Oregon Trail called The Longest Graveyard.”

THE OLD TREE
They left one lone Cedar standing
And the rest they trucked away to the mill
“See, we are not so bad” a company spokesman said
“At least we left one tree standing”
“Look how impressive it looks here by itself”
But the old tree did not see it that way
For the first time in centuries he was all alone
No companions to cast shade from the sun’s light
No other trees to keep the air fresh and moist around him
Not only this, but he was lonely now as well
Gone too was the undergrowth from around his trunk
The old fellow lasted a year before he started to decline
Brown scales fell like tears to the ground
And the bark from his massive trunk began to peel
Before long the old tree was no more
Just a brown wilted husk where once
A great giant Red Cedar had stood
“Well,” said the company official “we tried”
“Next time we’ll take the whole stand”
“Every single last tree!”

THE LONGEST GRAVEYARD
“Here lies an early traveler who lost his life in quest of riches in the west”
These the words found on a gravestone along the Oregon Trail
Thousands of would be settlers died on their way westward during the eighteen hundreds
Though most graves were never marked for fear of grave robbers
A person risked it all to go in search of the so called riches of the western frontier
Simply to fall could mean being trampled by the wagon behind you
Accidental gunshot wounds were all too common here
Cholera from contaminated water, bad weather and Indian attacks all caused numerous deaths
If you became sick or injured along the trail there was no doctor nearby,you were on your own
Still two hundred thousand brave souls started the trek westward
The majority reaching their destination in Oregon or California
Though many are the unmarked grave along the trail
Twenty five thousand people lie buried in America’s Longest Graveyard 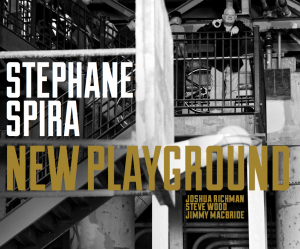 The show included the  talented poet Barry Plamondon with his new book.
Also a beautiful obitual letter to Late Waheeda Tasmia Peeran by her soulmate. Dr. S.L. Peeran.
A poem by inspirational correspondent Jeanne Probst , Poetic News, a story by Sharon Rowe and an except from Victor Swartzman’s new book, completed the show.

French-born, New York-based saxophonist Stéphane Spira grew up with jazz the old- school way: in late-night jams and cutting sessions. A protégé of longtime Chet Baker pianist Michel Graillier, Spira’s jazz career has taken him from 4 AM basement sessions in the underbelly of Paris, through acclaimed collaborations with trumpeter Stéphane Belmondo and pianist Giovanni Mirabassi, to the cutting edge of New York jazz. Trained as an engineer, Stéphane sharpened his chops off the books, after hours, immersing himself in a hard-edged milieu. Working in electronics during the day, he nevertheless found the time to compose and play. Perhaps since he honed his chops in the depths of the jazz underground, Spira was spared the awkwardness of growing up in public: Spira’s “remarkable maturity” (Radio France), has not gone unnoticed by the critics. Having dedicated himself exclusively to jazz since a final engineering gig in the Arabian desert in the mid-zeros, Spira has three previous critically acclaimed albums as a bandleader: First Page, Spirabassi (a duo collaboration with pianist Giovanni Mirabassi) and Round About Jobim, a tribute to the father of bossa nova featuring Lionel Belmondo’s acclaimed Hymne au Soleil ensemble. Spira’s fourth album as a bandleader, In Between, features more of the strikingly translucent, disarmingly catchy compositions that continue to characterize his work.

Thanks to all Jazz.com, Braithwaite and Katz plus Katherine Growdon . 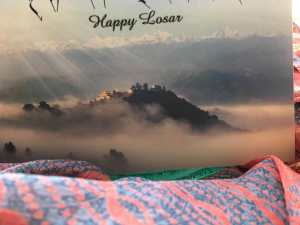 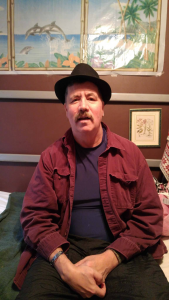 Barry Plamondon was born in Penticton B. C. and grew up in South Van.
Graduated from David Thompson High School, 3 yrs. in U.B.C. Arts program.
Certificate in Practical Horticulture-B.C.I.T., 20 yrs. as professional landscaper.
He turned to poetry after suffering two strokes and lived for 25 yrs. In Maple Ridge
Barry is married with 7 children.
Has published 4 books so far-the latest one-“Man and Nature, Silver Bow Press.
He has  appeared in various other anthologies and is an administrator at website-A Poet’s Diary.
His interests include gardening, nature, music, and hockey.

GO NOW
Go now my son to do what you must
Let not your youth be encased in rust
Like the fledgling, you must fly from the nest
To learn on your own is usually what’s best
For I have taught you all that I know
And I still watch with pride as you grow
Life’s lessons do not always come with ease
Sometimes, you must coax them and tease
And still to fall flat upon your face
Yet to rise up and get back in the race
That’s all you’ll ever need to know anyhow
So hug me once my son and then you must go now.