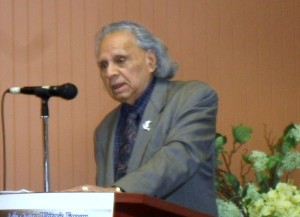 Ariadne’s Notes: We would like to welcome Dr. Stephen Gill, a long time supporter of World Poetry and attendee at various World Poetry events such as the World Poetry Canada & International Peace Festival, 2012.

An Adjunct Professor of EAU, Stephen Gill is an  expressive voice of Canada, India and Pakistan.  He focuses on global peace and social concerns as a poet and writer. He believes in peaceful means to achieve  peace.

Stephen Gill has authored more than twenty books, including novels, literary criticism, and collections of poems. His poetry and prose have appeared in more than five   hundred publications, mostly  in Canada, the United States of America and India.  He writes usually  in English. Once in a while, he writes poetry in Urdu, Hindi and Panjabi languages.  He has also written and published book reviews, research papers on writers and on world peace. Some of his Urdu/Hindi poems have been sung with music by prominent singers of Pakistan and India.

He has been asked several times by several organizations to judge their poetry competitions, and  he often evaluates dissertations of English Literature for doctoral students of universities in India. He has been the subject of numerous literary essays, books and doctoral studies.   He is also honorary editor/ advisor to several publications, and has edited publications, including the Canadian section of the World Federalist  newspaper, Writer’s Lifeline, and South Asian Christian Diary.

He is a former president of Vesta Publications Ltd.; the Canadian Authors Association (the Cornwall, Ont.  Branch); a national vice president of the World Federalists of Canada; the Multicultural Council of Stormont and Dundas;  chief delegate to represent the World University for Canada;   the Christian Cultural Association of South Asians,  Dean of Peace Studies at St. Simon’s  College,  London, England;  Co-chair  of Downtown Improvement Business Area (DBIA) of Cornwall, Ont. Canada;  and a director of the Children’s Aid Society of the United Counties of Stormont, Dundas & Glengarry (Canada).

At present, he is an honorary member of the Ansted University Board of Advisory Council, He has appeared in several prestigious national and international reference books, including  Immigrants We Read About by George Bonavia, International Production, Ottawa; Who’s Who In Canadian Literature, Reference Press, Toronto, Canada; Vesta’s Who’s Who of North American Poets, Vesta, Canada; Ethnic & Native Canadian Literature: A Bibliography by John Miska, University of Toronto Press; Something About The Author, vol. 63, Gale Research, USA;  Who’s Who In Canada, Toronto University Press; and Who’s Who in Ontario, Heritage Press, B.C., Canada.

Indira Kala Sangit University (IKSU) officially established the Centre for Stephen Gill Studies on April 21, 2012 in an impressive gathering of intellectuals.  The gathering was chaired by the Vice Chancellor, Professor Dr. Mandvi Singh.  She called it a historical move of  the university to establish this centre for scholars to pursue their higher studies on Stephen Gill.

Stephen Gill was born in Sialkot, Pakistan,  where he passed his early childhood and grew in India. After teaching in Ethiopia for three years, he migrated to England before settling in Canada.

—. Songs Before Shrine: A  collection of the following four collections of poems:

— The Flame.  This is the longest poem ever written in English on modern terrorism. Two books of evaluation  have been published.

*The Coexistence(a novel partly set in Canada and  India to draw a blueprint to live and let live.)

*The Blessings of a Bird(children story, illust)

Stephen Gill’s poetry and prose have appeared in more than five hundred publications, mostly in Canada, the United States and India. He has    written and published book reviews, research papers on writers from the East and the West, and articles on world peace. He has  also written poetry in Urdu, Hindi and Panjabi. Some of his Urdu/Hindi poems have been put to music and performed by prominent singers. Those songs have been released in two CD’s, titled AMAN (peace), and another CD is titled AMAN KI RAH (road to peace). The books of Dr. Stephen Gill are the subject of research by scholars of several universities for  doctoral dissertations.

BOOKS WHICH EVALUATE  THE WORKS BY STEPHEN GILL :

4. The Poetic Corpus of Stephen Gill: An Assessment  by Dr.Sudhir Arora. Dr. Sudhir Arora, a lecturer of English Literature in India, is focusing only on The Flame, the longest poem in English on modern terrorism.  Dr. Sudhir Arora is a prominent name as a writer and literary critic. Sarup&Sons, India.

5. The Flame Unmasked.Several prominent university teachers of English have contributed scholarly papers to this book edited by another prominent scholar and a lecturer in English Dr. Sudhir Arora. MUST TO READ by scholars.  Prakash Book Dept., India.

THESE CHILDREN (For International Children’s Day)

These children
have yet to learn
to deal with muddy pellets of abuse
or the ice of neglect
while maturing  into the oaks
of exceptional might.

Creator,
protect  these seedlings
in the sheltered bay
of your tender care
with apprehensive solicitude

To revive the Lazarus
buried in the grave of innocence
they have yet to use the coin
of  deep human  concerns.
They are
the embryos  of posterity.
Gardner,
guard the growth of these roots.
Nurture them
with rare delicacies of duties.

On their shoulders
sound structures are shaped
for generations to be wombed.
They are
the rainbow of the millennium.
Architect,
watch these foundations.
The feverish excitements of today
need them for their rest
in the castle of the comfort
of tomorrow.

The voyage
of the meaningful explorations
for the inner self
they have yet to embark.
They are the top deck
where our expectations
for the warmth of the spring
bask in the adulation of love.
Captain,
sail the steamer  of these children
to a safer island.

Riding even the ruthless currents
of domestic violence
et these angels advance
to  the port of the vision of peace.

They are
in your image.
God,
keep  these innocent souls
under the softness of your feathers.

Ariadne’s note: Each month we will share with you World Poetry Member News, awards, books and special events.

Yilin Wang, World Poetry Canada Youth Team Leader has been published in her first  anthology Fault Lines Poetry, issue one, edited by Anthony Pfannenstiel. www.faultlinespoetry.com  Her poem, How to Survive a Vancouver Riot was the only poem from BC and Canada to be accepted. Yilin’s accompanying photograph was on  display at the World Poetry Poetic Necklace , a month long display for the World Poetry Canada International Peace Festival, at the Irving Barber Learning Center at UBC in May  2012. Congratulations Yilin!

Indira Kala Sangit University (IKSU) officially established the Centre for Stephen Gill Studies on April 21, 2012 in an impressive gathering of
intellectuals.  The gathering was chaired by the Vice Chancellor,
Professor Dr. Mandvi Singh.  She called it a historical move of  the university to
establish this centre for scholars to pursue their higher studies on
Stephen Gill.

Professor Dr. Tiwari, Dean of the Faculty of Arts and Head of English
Department,  said that in the world of today the creative work of Stephen
Gill occupies a meaningful place. His epical poem The Flame that is about maniac messiahs, and his novel The Coexistence that provides a blueprint to live and let live,  will be read and analyzed  again and again by readersand literary critics.  Those who are working and plan to work at the higher level on the creative contributions of Stephen Gill will find this centre as one stop gateway for their myriad  scholarly needs on the university
campus.

Samarenda Patra wrote: Hello friends,here is a sample of accolades that I’ll be receiving from India Book of Records . It was founded by Biswaroop Roy Chowdhry in 2004 who himself is a Guinness world record holder for having born with a super fast memory…. 🙂 🙂 🙂 ♥ ♥ with Ariadne SawyerVassiliki MandalouMichael Kwaku Kesse SomuahDimitris P. Kraniotis 🙂 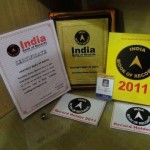 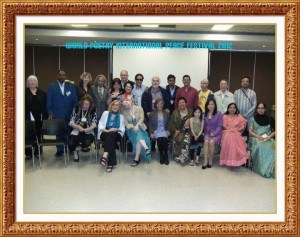 Some of the peace festival family.

(Photo credit by: Ceri Naz taken by the volunteer Freddy)

World Poetry is excited to report a wonderful and inspiring festival with poetry exhibits, talented International and National poets, speakers and dancers. The World Poetry Youth Team with interim leader, Kimberly Tsan hosted an interactive  panel which was praised by all.  275 gift poems were given out at the exhibitions and as gifts to the public. At the New Westminster Public Library on May 23rd, 46-53 people welcomed the poets with a lovely cake, book launches and readings.

The main event was at the Richmond Cultural Centre, May 25-26 with the three themes of Inspire, Achieve and Celebrate!

A World Poetry Lifetime Achievement Award to Richard Doiron and the Empowerment Series Awards to the International poets visiting from Japan, India and other countries. Over 152 people attended during the two day festivities.

In addition, there were two Poetic Necklace Exhibits, one from May 4-28 at the University Of British Columbia Library, Vancouver, BC and one at the Richmond Cultural Centre, Richmond, Canada, May 25-26th.

World Poetry would like to thank the World Poetry Directors who co-hosted with World Poetry Reading Series Society President, Ariadne  Sawyer, the wonderful World Poetry volunteers and the help of committed partners and sponsors. A special thanks to the City of Richmond for their help and to UBC for the Poetic Necklace display. Also, great thanks to Roberta Price who did the First Nations welcome and so many who joined together to make the festival the best ever! Heidi Mueller, our empowered webmaster also received an award.

So many poets and supporters from around the world wrote notes of good wishes, support and love. There was such an outpouring of kindness and love that a number of attendees said that they had never experienced such a feeling of bonding and support. 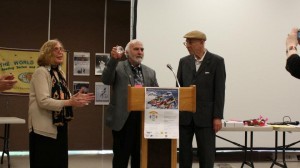