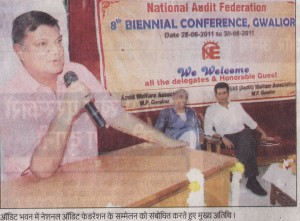 K.K. Srivastava, born in 1960 in Gorakhpur, U.P. did his M.A in Economics in 1980 from Gorakhpur University. He joined Indian Audit & Accounts Service in 1983. He is posted as Chief Auditor, New Delhi Municipal Council, New Delhi. He has two volumes of books of poems to his credit. Ineluctable Stillness (2005) and An Armless Hand Writes (2008)

His books have been reviewed in newspapers like Hindustan Times, Pioneer, Tribune on Sunday etc. Bernard M. Jackson, a prominent poet from U.K and adviser to Norfolk poets, in his review of Ineluctable Stillness, described Srivastava’s poems as “work of a perfectionist in his natural element’ and compared Srivastava’s poems with those of T.S. Eliot. Dr. Stephen Gill, Canada based poet has called Srivastava a “thinker” and praised symbolic nature of his poems.

All through I noticed my inside being
rolled out,
and I tell my tears to
smile at their fate.
Curvous desires do shrink, again and
Again, but my mirrors don’t reflect these.

Let me now, at least , shed my
Despondency, for a while.
Moments, never discerned moments,
Wait avidly for their turn in life
To unfold .

A melancholic hush descends
Sumptuously, egging me on
To be one with the desires
I live by.
Etiolated desires to live by.