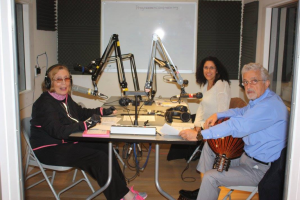 Ariadne’s Notes: On June 8, 1-2 PM, CFRO 100.5 FM , The World Poetry Café was honoured to welcome the renowned poet and musician and oud professional player Serwan Yamolky to the show along with the talented and beautiful poetess Lozan Yamolky. I am featuring them separately on site . A fascinating show with poems read in Kurdish, English and Arabic. The lovely Arabic and Kurdish songs with the  beautiful oud created an  exceptional show. Canada is so lucky to have such treasures.

Special e-poet:   Minal Sarosh  from India was also featured and will have a special feature on site. 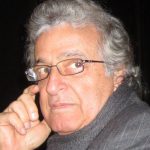 Serwan Yamolky was born in Kurdistan, northern Iraq, in the city of Sulaymanya in 1945.​

He studied Political Science and Law at the University of Baghdad. However, his true calling was music. His older brother, Jamal Yamolky, was his first oud teacher. Serwan started to develop his own oud techniques at the age of 15. In 1967 he was one of the first members of the Iraqi Music Council as a composer. Serwan also studied at the Music Studies Institution in Baghdad. In the Iraqi Academy of Fine Arts at Baghdad University, he studied oud further with maestros Rawhie Al Khammash and Al Haj Mu’taz. Moreover, he studied and frequently performed with maestro Jamil Bashir (as a contrabass player) and with Jamil Salim (as oud player).​

During these years, he also cultivated his skills as a poet, writing nearly a hundred songs and publishing numerous poems in Iraqi magazines. http://www.serwanyamolky.ca/​

In 2004, Serwan was invited by the Vancouver Symphony Orchestra and the Vancouver Association to perform for the Dalai Lama” at the Orpheum. Other performances of note include appearing with the Silk Road Ensemble and the Vancouver Inter Cultural Orchestra. He has been a regular participant (2001 through 2009) in the Multi-Disciplinary Avant Garde event ANU. Never forgetting his roots, Serwan has also recorded numerous pieces for the Kurdish TV Channel M2003.​

Serwan composed, and had contributed songs, music, and performances for the play “Jona and the Falafel War”. He had also appeared as a guest musician on albums including “The Butterfly Effect” by Tim Gerwing (2004), “Invisible World” by Tanya Evanson (2005), “Dirty Bottom” by Raymond Langston (2007) and “The Memorists” by Tanya Evanson (2009).

In a book signing his latest published poetries, Love of a Different Kind, an evening of traditional Iraqi songs, classic Arabic music and poetry reading took place at Douglas College (2009).

As a soloist and with other artists, Serwan had performed at numerous festivals and cultural events around the world:

Most recently, Serwan lead the Inanna Group in a concert with Nadeen on May 14th at Douglas College. He appeared with Tim Gerwing and Liam MacDonald at the “Love in the Time of Andalusia” event at W2 Storyeum. Serwan Yamolky was also nominated for a Jessie Award for his musical score for the play “9 Parts of Desire”, which ran from October 14th to 30th 2010.

Serwan’s musical performances have been heard on CBC, One Blue Island, and Coop Radio (Wax Poetic).