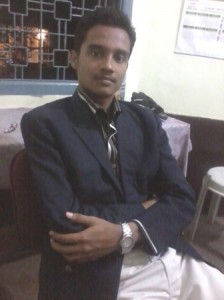 Ariadne wrote, I am pleased to welcome Mr. Abhishek Rath to our site! Welcome.

It would be of great help if you feature me on the World Poetry site.”

This is one of my poems:

The dim radiance rushing
to take shelter inside my eyes,
Shadows of flipping calendar pages
soothing the half painted walls.
Dark thoughts jumping from
extreme corners starry  ceilings,
Into my pen,out on a paper piece,
in the form of a dark poem.

Tears that are secrets of the ink,
kept surging,
A poem-Bruised scar of my pain
got penned in rhymes.
The malodorous smell of stinking darkness permeated my room, Sweat smelling weary night kept staring at my despairing looks.

Two strangers on the road
were having a silent conversation,
Their attire resembled the
black gown that loneliness puts on.
Darkness had swallowed them whole,
Locked gates kept them staring for long.

Evil clouds were circling over their heads , They were looking pale, gloom and strained.
I was watching them from a half-opened window, Brooding on their furtive plans of tomorrow.

More drifted by their thoughts and talks, I went downstairs to their conversation spot.
The moon was the gray streetlamp above them, And beneath them was lying my wondering gaze.

“Who are you  both, I want to know,
In the midnight what makes you talk so long ?”
Thus I questioned them without any fear, But I could notice their eyes damped with tears.

Then one of them replied in a stumpy voice, “I am Life and he is Death, Neither can live together, Nor can one live without the other, And we both meet together, Only after a complete life-time is over”.

Stunned , I stood there still like a pile of burnt ashes.

Soon their silent conversation came to an end.
They hugged each other and left the place.
One made his way towards my left,
The other followed the path to my right.
And they were on a single circular track.

At first, they would walk away from each other,
But finally meet at the same spot,
From where they had parted, and started
Their life-long journey to meet one  another… 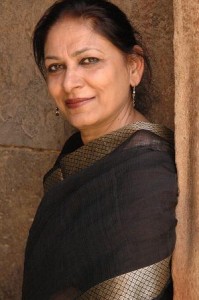 Ariadne’s note: We are very proud to present a talented poet and photographer who has shared her art with World Poetry over the last few years!     This is a beautiful poem that shows the need to appreciate our winged sisters and brothers. Thank you Mamta!    Amazing news! www.worldpoetry.ca reached 2,541  visitors on Sunday, October 7-the most ever! Thank you Yaman!

Mamta Agarwal was born in India, at Saharanpur in the state of Uttar Pradesh. She studied English Literature for Masters Program at Punjab University, Chandigarh. Subsequently, she taught in Govt. College for Women and MCM DAV College for Women from 1972-74. Later, she joined a publishing house in New Delhi, as an Associate editor. After a few years took up free-lance writing, and contributes articles and poems in magazines and journals for the last 25 years. Her diverse interests, in art, architecture, history led her to pursue a course conducted by Govt. of India, Department of Tourism. She worked as a cultural ambassador for two years from 1980- 82. Subsequently, on moving to New Delhi, she taught ‘Travel and Tourism’ at International Polytechnic, New Delhi for two academic sessions and went on to publish a book on Tourism and Hotel Management.

In 1987, she decided she wanted to work with children and enrolled for B. Ed. Later instead of joining a mainstream school, she chose to join an experimental school, in New Delhi, run on Shri Aurobindo and Mother’s teachings and again did a teacher’s training course.

She has written a book on essays on Contemporary issues. Her first anthology of poems titled ‘Rhythms of Life’ was published in 2008. Her second book, titled ‘Voices of autumn and other short poems’ came out in August 2010.’ An anthology of Contemporary women poets from India’, published by Roots and Wings, selected 10 of her poems for the anthology. It was released in September, 2011. Her poetry has been published in major journals in India, Rock Pebbles, Contemporary Vibes, Poets International, SAARC Journal of Literature, Delhi Poetries’, Web sites like poemhunter.com, Poet freak. Com, Voices.com, Allpoetry.com, museindia.com, Boloji.com. International web journal, Enchanting Verses, Print Journal, Albatross,, Magazine of the Constanza Haiku Society, Romania

She has been invited to recite and share poems at poetry forums Indian Poetry Society, and International poetry festivals held in Delhi, in the Embassy of Portugal, World Poetry, Canada and Italy in collaboration with Delhi University.

A member of FOSWAL- FOUNDATION OF SAARC WRITERS AND LITERATURE

Executive Member – Indian society of Authors
Member, Universal Poetry
Her name is included in Who’s who of Sahitya Akademi
Some of her poems have been translated in Hindi, Urdu and Romanian languages.
She has read research papers at seminars organized by Indian Society of Authors.
She has shared her poetry at SAARC FESTIVAL OF LITERATURE.
She writes in English and Hindi.
Her poem ‘In the deep recesses of my heart’ was selected for display at World Peace Poetry, Canada, May 2012. One of her photographs won an award at World Peace Poetry, 2012

Two poems were selected for the event Peace Rain Poetry at Nicosia, Cyprus, May 2012 A poem titled ‘Long last Indian summer comes to an end’ was selected in a competition and included in the anthology ‘Mind and Heart’ by Forward Poetry UK IN 2011.

Spare just a moment for the birds,
Dreams they awaken as they chirp,
Flap their wings, soar and soak us in mirth
Do sorties in the sky, stirring hope in our soul.

Spare just a moment for the crane
Who flies from bleak winter of Siberia,
In search of warmth, food, wet lands
And green fields, instead only finds silt.

Spare just a moment for the geese,
Who uncertainly hover in the sky;
A cloud squinting seemed to ask why
Alone, where is your flock, why do you cry.

Spare just a moment for bulbul,
Bleary as it alights on concrete ledge-
Vacant eyes, on the edge, seems to brood,
Whatever happened to Neem and Babool.

Spare just a moment for baya weaver
Who adapts to urban life,
And builds a nest on a clothesline;

Spare just a moment for the bird of paradise
Its majestic courtship dance full of splendour;
Feathers plucked, and sold at a lofty price,
Just to adorn the walls and hats of elite.

Spare just a moment for an albatross
Who devotes all its life to its mate,
Feels lost when it’s gone, throbs with ache,
Wonders how come only hunters lie in wait.

Spare just a moment for an Arctic tern,
Up in air, hit by jagged metal wings,
Falls in some murky far off field,
Sighs, not a friend by its side as it dies.

Spare just a moment for all our avian friends
On endangered list, on the brink  and edge
Of becoming, in times to come, extinct
Can you bear to be awakened by the wails of spring?

Scientists estimate that there are about 300 billion individual birds in the world- that’s 50 birds for every person on the planet.