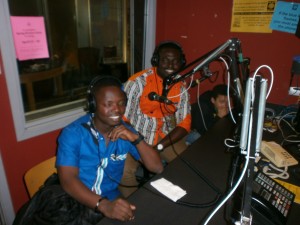 Kwame and Michael in the studio!

Ariadne’s Note: The World Poetry Radio Show Team presents the shows for July and August! You can listen live on www.coopradio.org, or download the show later.

The show broadcasts from downtown Vancouver, BC Canada on Coast Salish territory and reaches people in 48 countries on a regular basis. The radio team of producer and host Ariadne Sawyer, hosts Israel Mota and Vivian Davidson are supported by our wonderful techs, Medhi , Kelly and Gerry who keep us on the air. We are able to provide phone in interviews for those that live in other countries or for various reasons are not able to come to the station. We are all volunteers and do our best to provide quality multilingual, intercultural programing . We feature as many Canadian musicians as possible. Your voices are important to us.

August 13, the amazing duo of Rio Samaya, Pancho and Sal, performers who have toured the world and have several CD’s which bring joy to all. http://riosamayaband.com/
August 20, Pandora’s Collectivehttp://sites.google.com/site/summerdreamsfest/home/gala10th Anniversary!

Well known author Nina Munteanu with her new book the The Last Summoner a historical fantasy that spans 600 years of history from
medieval Poland. www.NinaMunteanu.com.

August 27, James Tarantin, with his new book Equation and the company TarantinDream which he founded with the help of Larry King. Based on a dream He will be speaking also in Arabic. http://www.jamestarantin.com/#

Also, we are honoured to have Peter Thabit Jones is a Welsh poet and dramatist.He and  Dylan Thomas daughter, Aeronwy wrote the first-ever Dylan Thomas Walking Tour of GreenwichVillage, available as an internet PDF, audio download, and guided tour via New York Fun Tours,  and forthcoming in2014 as a tourist book and an Internet App. The Walking Tour will be a central focus for the New York celebrations of the Dylan Thomas Centenary. Peter has been writer in residence at Big Sur and has a new book coming out. He will be calling from Big Sur, California and returning to Wales at the end of August.