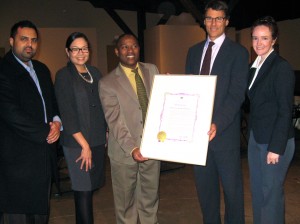 Learn  more about it with Jean de Dieu Hakizimana,

You are invited to the free, entertaining annual event: HOLD ONTO YOUR TONGUE, a celebration of International Mother Language day, February 16, 2-4 pm. At the Roundhouse Centre.  Enjoy family entertainment, food, poetry. dance and music! Join special guests Evan Gardner and Dustin Rivers will present “Where are your keys. Play a game, Learn a language! Techniques for accelerated learning, community building and language revitalization.  World Poetry will be reading a Woven World Tapestry poem O Mother Tongue specially written for the event by Ariadne Sawyer and read in various languages. In addition, the Benefits of Bilingualism cards showing some of the latest research will be given out.  Also, on February 23, 2013, at the Downtown Vancouver Public Library for storytelling and fun activities. World Poetry will also be reading at the Atrium at the library with Yilin Wang, Jacqueline Maire, Duke Ashrafuzzaman and Israel Mota.

When the world loses a language we lose part of ourselves – Shashi Tharoor https://www.facebook.com/motherlanguagevancouver https://twitter.com/MotherLanguage1 http://youtu.be/WWc7LeyTDww

And now for our Feature:

Jean de Dieu Hakizimana, Founder and Executive Director of Neighborhood Care International Association (NCI), a voluntary -not-profit organizational based in Vancouver with vision to cultivate a global and inclusive community that cares for its neighbors talks about his vision for International Mother Language Day.

Background: “The idea to promote the International Mother Language Day (IMLD) with the mission in Vancouver, started on 2008, when I visited the UNESCO website, and I decided to write a proposal and has vision that will be celebrated in Vancouver.

Participation and Engagement Vancouver is an ideal city, location and partner to celebrate IMLD due to the diversity of the people who populate the city. The people of Vancouver speak a multitude of languages. Based on the 2008 Census figures, 50% (286, 710) of the city’s population identified English as their mother language, while 50% 9286, 175) identified a language other than English as their mother tongue. Other than English, the top ten other “mother language” are Cantonese (63,695), Mandarin (22,565), Punjabi (15,505), Vietnamese (10,440), French (9,290), Spanish (9,290), Korean (7,870), and Japanese (7,040). IMLD events hope to encourage and facilitate awareness and excitement of learning and retaining even the more marginalized languages such as with urban Aboriginal population and will work towards a broader acceptance these cultures.

Timeline: On July 29, 2010. Mr. David A. Walden, Secretary -General of Canadian Commission for UNESCO commissioned Neighborhood Care International Association to promoting and to organizing IMLD throughout the province. Mr. Gregor Robertson, Mayor of Vancouver and City Counsellors issued a proclamation and full supportof the event.”

Jean is an instructor, interpreter, career and vocational counsellor, and community organizer who brings energy, passion, and creativity to individuals and organizations while assisting them in implementing positive social change.

He has taught a wide variety of subjects related to community and business development, and currently holds a BA in Adult Education from the University of the Fraser Valley – minor of Indigenous Government from Nicola Valley Institute of Technology, a Diploma in Business Administration from CDI College, and an M. Div (pending) from ACTS of Trinity Western University. Currently, he is a student at Vancouver School of Theology in Master of Divinity program.

He is the initiator and partner with PHS Community Services Society to establishing the immigrant and refugee support group’s vision is to provide information and support services, include initial needs assessment, orientation and referral to community and government services in Downtown Eastside (DTES).

Ten years ago, he created a community space and engaged the British Colombians to dialogue and raise awareness about the socio-politico -economic for African countries and Diaspora.

Jean de Dieu Hakizimana lists his key goals: a) to raise awareness of the diversity of language spoken and written in Vancouver today and historically

b) To encourage community partnerships

f) To create avenues for participation and community engagement for marginalized social/cultural groups g) to raise awareness that holding and practicing one’s “mother language” is a “right” of all citizens of Vancouver and that civic agencies support this practice. Jean de Dieu Hakizimana is a visionary and an empowered promoter.

World Poetry is pleased to be a community partner of the Mother Language Event, February 16 and 23rd.

Here is the poem that Ariadne wrote for  Mother Tongue Language Day  (IMLD) and which will be read as a group poem February 16th.

O Mother Tongue,
Come back, come back to us
Bring your vibrant rhythm,
Melodious liquid sound
Enhancing our words.

Bring your culture
Bursting forth
Many layered flowers
Opening  to the light.

O Mother Tongue, don’t leave us.
Do not go to that land
of dead and dying languages
The neglected gravestones
Of disappeared tongue
Buried in oblivion.
Seeped in sorrow.

O Mother Tongue
Provide  the culture
Beauty and peace to our world.
Stay with us,
stay with us