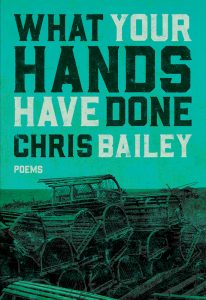 Our second caller at 1:30 PM PST was the talented poet from PEI, Chris Bailey with his new book: What Your Hands Have Done by Nightwood Editions , www.nightwoodeditiond.com The book is a masterful portrayal of fisherman and family as well as a vivid description of culture. Having lived in Kodiak, Alaska among fisherman, I was fascinated by certain similarities, among them being fiercely independent and proud of their lifestyle.
For the first time we welcomed a girl nature poet Tshering Zangmo Namsa from Bhutan with her moving poem on unity. Thanks to Victor Schwartzman , our technical engineer for reading her poem.
We read two poems from n’s new groundbreaking book, Caution: Deep Water about the concerns of seniors and retirement living.
CD music was by Stan Rogers and Djelimady Tounkara. A special treat was a beautiful Seasons Greeting From Yoshifumi Sakura , World Poetry Music Director and composer of our anthem as well as a great postcard and message from World Poetry Correspondent, Rui Carvalho with a message in Portuguese “Tudo De Boh or “All the Best”. Author Sharon Rowe had a brand new story for her second book: Big Bessie Goes to Mars, read by Victor Schwartzman. 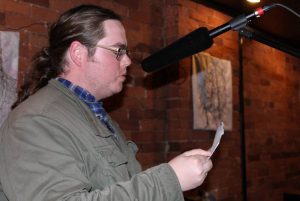 Chris Bailey is a fisherman and award winning author from North Lake , Prince Edward  Island, He has an MFA in Creative Writing from the University of Guelph and is a past recipient of the Milton Acorn Award. His work has appeared in numerous journals .

The way your father tells you is simple. To the point.
Speaking with the tone he’d use to say the direction
of the tides, what your brother Tom in Fort Mac said,
or describing the noise the truck axle makes.

His hand on the thing sprouting from his neck:
The doctor says it’s probably cancer. They’re cutting
it off next week. A strip of paper towel in front of him.
A cup filled with tea. A new pack of cookies that rattles

when he reaches in, not looking at you. He endures
your stunned silence, says, I asked if he had his pocket
knife on him, said he could do it right there
if he wanted. Then: Sit down, boy. Have a cookie.

Not knowing what else to do or say, you sit.
Take a cookie. The kind with icing in the middle. One
half vanilla, the other chocolate. He fills ice cream
dishes with these for long days on the boat.

Something to snack on when working in the sun.
You snap the cookie in two, then four, and stare
a while at what your hands have done.