Ariadne’s Notes: On August 18th,  CFRO 100.5 FM, The World Poetry Café Plus welcomed Kim Fu whose unique creative voice is outstanding, Mixing humour and darkness with irony, her poetry is both compelling and fascinating. She was our second poet from Nightwood Editions and deserves a featured spot here .  Kim will be participating in WORD and we hope to meet her then. World Poetry will be celebrating the poetry and music of Korea at WORD. Music from Don Amero and Andy Vine. 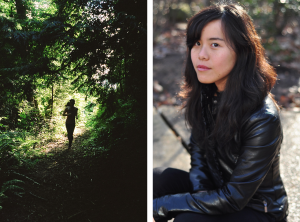 Kim Fu is a Canadian-born writer living in Seattle, WA.

Her debut novel FOR TODAY I AM A BOY (2014) was the winner of the Edmund White Award, finalist for the PEN/Hemingway Award, a New York Times Book Review Editor’s Choice, and long-listed for Canada Reads, among other honors.

Her first poetry collection HOW FESTIVE THE AMBULANCE (2016)

Fu has an MFA in Creative Writing from the University of British Columbia. For 2015-16, she has received residency fellowships from Berton House (Dawson City, YK), the Ucross Foundation (Ucross, WY), Wildacres (Little Switzerland, NC), and the Wallace Stegner Grant for the Arts (Eastend, SK).

At the poet party

we talk about all the poets

of stones in a pocket

over the gas oven.

“She didn’t want to leave

her children alone,” we say.

we are made of sterner,

We can weather the draft

through a crack in the bricks,

the presence or absence

of children or fame.

When one of us

we say he was ill,