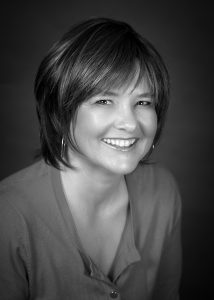 Lisa Bird-Wilson is a Saskatchewan Cree-Métis writer whose stories have been nominated for the Journey Prize, among others. Her work has appeared in periodicals such as Geist, Grain, Prairie Fire and in anthologies such as Best Canadian Essays and cîhcêwêsin. Lisa’s award-winning fiction Just Pretending (Coteau Books 2013) won numerous prizes including Saskatchewan Book of the Year, and was a finalist for the Danuta Gleed Award. He poetry book, The Red Files (Nightwood Editions), was released spring 2016.

hats askew and mitts bejeweled
with snow, coats open
to the weather, the girls play
in the shadow of the school, just inside
the invisible fence line
they make snowmen and snowwomen
while a huddle of trees holds watch

the girls’ class grows up in nine years
of sharp-edged photos, each time exposed
after play, exhausted—
in the front row an unwavering eye
catches the camera, an Indian
girl, number One-
Seven-Four on the school roll call
the girl with a narrow look, small
for her age, straight-faced,
never smiling, never
frowning, unreadable
as if she willed her young self long
ago to stop scenting the trap line, smoked
hide a vivid memory, pushed
aside: dense sage,
wild root, the open plain.

Nightwood Editions is committed to publishing and promoting the best new poetry and fiction by writers across Canada. Our goal is to give readers a chance to explore the high-quality work of emerging Canadian writers, and new writers an opportunity to publish their work in book form. Ultimately, Nightwood Editions strives to publish books that foster a community of writers and readers, providing a forum for thought, discussion and interaction while reflecting the diversity our country is known for.

Nightwood is also dedicated to producing excellent Canadian non-fiction that helps support its literary list. Whether publishing poetry, sports, fiction or crossword titles, Nightwood Editions maintains the highest standards in all it undertakes, building on its growing reputation.