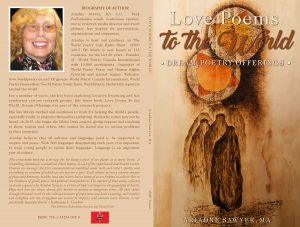 Ariadne’s Notes: On April 18, 1-2 pm PST, hosts Koyali Berman and Jacqueline Maire joined me in a celebration of my new book, Love Poems to the World , Gift Offerings. I would like to thank them for the wonderful launch as well as our amazing Tech Victor Swartzman  and special volunteer Sharon Rowe.

To the wonderful  Afghan artist Mirwais Jabaz , a humanitarian who has helped so many refuges , sharing his work and art. He gave permission for one of his paintings to be used as the cover of the book, thank you.

Great thanks also to the First Nations Elder, Gabriel Bartleman who apprenticed me when I was getting my MA, Vera Manuel ; my soul sister who kept pushing me to finish the book, in person and in dreams who believed in me and sent a powerful dream poem that is in this book.

The book would not have been possible without the support  and encouragement of Katherine L. Gordon and the kindness and support of Mamta Agarwal who kept encouraging me.

Special thanks to a pianist from Salt Spring Island whose music was featured,

The radio show included poems from the book selected by readers and reviewers. Some of these are posted below.

I am so grateful for the great response to the book which has now has been placed in libraries in various countries and will work on a free e-book that can be offered to our 10,000 WP participants in the world.

My Dreaming Journey:
This book began as a result of my association with the Tsartlip Elder, Gabriel Bartleman who became my lay advisor for eight months while I was working on my MA in Psychology and gave me the gift of apprenticing with him.
He told me: “Ariadne, the Earth needs love and caring. It is wounded.” Then he mentioned the First Nations visions and dreams and how elders could go out to wounded places and stay there until there was healing. He also mentioned how dreams reach out and try to contact the sleepers, channeling and guiding the dreams that are needed to help the world.
I have had dreams before but did not remember most of them so embarked on a program of research starting with ancient cultures, Greek, African, Persian, Chinese and First Nations from all over the world. I also learned about lucid dreaming, healing dreams, dream friends and advisors, pre-cognitive dreams and the importance that they played in many cultures.
One of the biggest tasks on my journey was learning how to listen and record. I found that the best way for me was to think about something I had seen or heard during the day, go to bed with paper and pen and usually about 2 am, I would get a clear dream. I would listen and write it down in the dark, since I found that if the light was on, I would lose the dream.
This led to some harrowing times since when I awoke in the morning, I found that I had written over some of the words and had to use a “fishing method”, remembering the last segment and pulling the rest out hopefully like a line of fish. After some time I could write quite clearly and happily continue on. The next morning if I had time, I would read the dream gifts and type them in along with my notes.
The dreams that are in this book are not altered since they come from another place and are not really mine.
There are many methods for dream recall and recording but I am sharing the way that worked the best for me.
During this time, I had a dream research group on line and created a course for them. It was very helpful in my own dream life since their support and kindness added greatly to the creation of this book. It was also interesting to hear from them what they were creating from their dreams, books, CDS, poem, scripts and healings.
There is a lot of information on dreaming and I would urge you to do research and create what works for you.

Earth
My essence floats on the wind, hitching a ride on the occasional white cloud.
In joy and exuberance, my weightless self
visits the special spots of the beautiful blue planet.
Flowers, an ocean of colours,
intricate geometric designs created by master engineers,
mathematical experts, each flower a work of meticulous design.
I dive down marveling at the desserts,
Incomparable sand sculptures ever changing.
Skimming over the oceans, reflections of peaceful seas, shimmering tones of silver, streaks of gold.
Changing to violent storms, gales, whirling wind and spray.
Thick jungles, teaming with life, vibrant rioting colours, unknown herbs, medicines, creatures rarely seen.
Mountains with lakes and valleys, an aura of ancient beingness.
Huge peaks, dressed in white, caressing the sky.
Satiated, my essence floats on the wind.
Giving thanks to this blue world.
I love you.

Note: A wonderful lucid dream poem. I traveled the world and felt so light and free when I woke up-still flying.

The Tortured One
I sit on the floor in an empty room.
A hole , a pit.
Waiting for the next torture.
I try to strengthen my mind, prepare myself for the pain, the horror.
The door clangs open, they are here.
I am in the room-the room of terror.
They yell at me, then act nice, give me water.
Offer me cigarettes, say I am beautiful.
They change again.
Give me electric shocks, blindfold me,cut me.
Burn me, throw water.
I think I am drowning.
I have forgotten how to answer, my head is pounding from the blows.
I try to think of happier days, try to bring my mind back to a different place,
remember my students and the other teachers.
They bring in snarling dogs to attack and abuse my body.
My mind is going away, it is gone…
I am back in the hole, isolated, beaten aching, dirty.
They want information I can’t give, names I don’t have.
The faces of teachers at my university flash, no names are coming.
Please world!
It is time to stop the torture.
It is time to get along, all peoples, views, and religions.
What was once an enemy can be a friend.
Please world, send love to the tortured and the torturers.
With love, the torture may go away.
No one will have to wait in terror.
Listening to the door crack open and the next session to begin.

Note:
This was a client from the Middle East that I worked with in BC. She had been a university professor and was picked up to be made an example to others. This was such a powerful dream that I was considering not using it in the book. She called me and I read the poem to her. She asked me to go ahead and include it since torture is a worldwide phenomenon.
During the period of three years, I did volunteer work with 146 survivors of torture, many of them from Survivors of Torture organization in Victoria, Canada.
Thanks to Amnesty International and others, she was released and went to New York where she was fearless even in the most dangerous situations. She walked the worst streets at night.
She came to BC married, started teaching again. Then the entire trauma came back. When she came to see me, she was terrorized of dogs and noises. She is doing much better now and has a mostly normal life and is able to teach in University once again. She still does not like dogs and has to take precautions.
Unfortunately, torture is alive and well in the world, causing pain and suffering all over the planet. Unfortunately, torture is alive and well in the world, causing damage to at least seven generations.
I agree with the poem. It is time to stop the torture. She endorsed this poem saying that it was important since it happens in many places in the world.
In the partly lucid dream I was with her and it was a hard one to be part of and then write it down.

Selected by Kagan Goh, poet,  performer,filmmaker and writer. He chose this one because he felt that it needed to be heard. My client also told me before the book came out: “Please spread the word, torture is widely used all over the world.”

Egyptian Football Girl
I am a football girl.
I love the beautiful game.
In my home we live 11 to a room,
in my grandmother’s place.
Every morning, I train for the tryout.
I get up early, pick up my pallet and carefully step over the little ones.
Go to practice in a quiet place, uncle watches to be sure I am safe.
The air blows through my hair, playing with it, drying the sweat.
I feel transported to a new powerful place.
My body is joyful, I am happy; I am flying through the air!
Suddenly, I fall grasping the ancient dirt of the pharaohs in my hands.
Jumping off the ground, carrying the dust with me under my fingernails.
I am renewed.
I love the beautiful game.
It is an art; it is a dance with a ball.
My uncle goes with me, disapproving.
He asks me why I do not wear my scarf.
I tell him I need to run free and fast,
to help my grandmother buy bread,
stay in her room instead of the street.
Girls do not play football uncle says, shaking his head at it all.
He loves me, my grandmother needs the money.
She cries about being thrown out, she is afraid.
I yearn to be in the team.
Tryouts come.
I pass, I am in.
I feel like a new person.
My grandmother laughs; she can keep the room and all of us.
My uncle is happy yet sad.
New ways are coming he says.
New ways are coming.

Note: This poem came from seeing a remarkable documentary on an Egyptian woman who creates girl football teams despite resistance. She created a number of girl’s teams that play each other and even boy’s teams. This was the poem about Neda, a young girl who tries out for the team and illustrates some of the changes that are happening in Egypt.
When I woke up at 2 AM, I could feel sore muscles and dirt under my nails.
This was one of the most powerful lucid dreams that I had. The feelings of freedom, of flying through the air, my running muscles in over drive and sore lasted for some time.

Thank you all for the love and support, 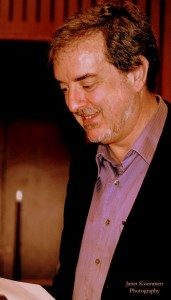 Alan Girling grew up in North Vancouver, lived in Japan for six years, and now lives in Richmond. He tends to write poetry, or occasionally, short fiction, non-fiction and drama. His work had been featured online, in journals and anthologies, on the radio, at local live readings, in shop windows and in one slim chapbook. Venues include Lichen Arts and Letters, Hobart, The MacGuffin, Smokelong Quarterly, Pagitica, FreeFall, Galleon, In My Bed, Ink, Sweat and Tears, Body Breakdowns, Blue Skies, Black Heart Magazine, Canadian Stories, CBC Radio, World Poetry, Poetic Justice and Surrey Muse. He was a finalist for the Larry Turner Award for Non-Fiction, had a play produced for Vancouver’s Walking Fish Festival and has received two first place prizes for poetry, one in the 2006 Vancouver Co-op Radio Community Dreams Contest and most recently in the 2015 Royal City Literary Arts Society Write On! Contest.