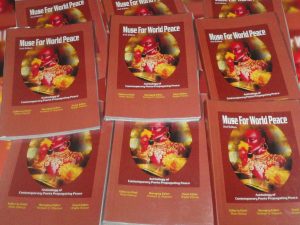 “Dear Poets and Lovers of Art, It always seems impossible until it is done….” we had the dream to bring change – anew in the deathly state of the world with peace moving words. Poets, inkers around the orbs Gathered to say “No” to hate, racism….War And have embraced peace – Life Through this work of Art. We birthed the dream only with words but its reality is in us…

This second edition featured 128poets from 10 nationalities with over 300 poems. The selected poets range from Uloma Naomi James (a 13 year old from Nigeria) to Adesewa Oyinkansola (Nigeria), Gopakumar Radhakrishnan (India), Roula Pollard ( a Greek poet), Ariadne Sawyer (Canada), Benjami Nii Oku (Ghana), Maria Miraglia (Italy), Ceri Naz ( Philippines ) Mutiu Olawuyi (Gambia), Timileyin Gabriel Olajuwon (Nigeria) and many more. However, the anthology has been launched at the National Poets Meet on May 14th in Kokalta India and was Exhibited at Dubois Memorial Center during the Pentasi B World Poetry Friendship Festival in Accra Ghana respectively and is now available on Amazon India and International. 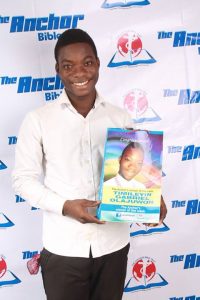