Ariadne’s Notes:  The World Poetry Café on March 14 at 1:10 PM PST on CFRO, 100.5 FM  had the honour to celebrate  Naomi Beth Wakan ‘s book launch  and poetry readings  on Tanka and Haiku. Since Naomi was not able to call in, Victor Schwartzman (our super tech) and Ariadne Sawyer, host and producer took turns in reading different segments. This was the first time that we had done this and we did our best.  I learned about both Haiku and Tanka and really liked the easy to learn format and the descriptions.  This show had a lot of positive responses from listeners. Poems and information  below.

LISTEN TO THE SHOW RIGHT NOW! 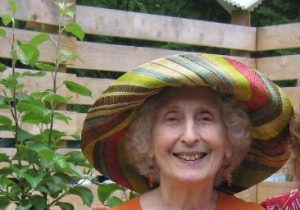 Naomi Beth Wakan is the inaugural Poet Laureate of Nanaimo (2013-2015) and the inaugural Honorary Ambassador for the Federation of BC Writers. She has published over 50 books, among which, her essays are in Late Bloomer-on writing later in life; Composition: notes on the written word; Bookends – a year between the covers; and A Roller-coaster ride – Thoughts on aging (all from Wolsak and Wynn), and On the Arts (Pacific-Rim Publishers), Bent Arm for a Pillow (Pacific-Rim Publishers). Here most recent books are Back and Forth (Pacific-Rim Publishers) and The Way of Tanka (Shanti Arts). Naomi is a member of The League of Canadian Poets, Haiku Canada and Tanka Canada. She lives on Gabriola Island with her husband, the sculptor, Elias Wakan.

“I am delighted to announce that my trilogy is at last complete. It covers an introduction to haiku and tanka writing for beginners. The books are “The Way of Haiku,” “The Way of Tanka,” and “Poetry that Heals.” I’d like to tell you a little about each book.

The Way of Haiku is a guide for learning to write the most popular form of Japanese poetry: haiku. It is also a comprehensive examination of the form and, I hope, an eye-opening view into the way that reading and writing haiku can change the way one looks at life. Writing haiku helps you appreciate the wonder of ordinary things and ordinary days. In “The Way of Haiku” I discuss the history of haiku’s development, its important literary elements, and the differences between haiku written in Japanese and those written in English. I provide numerous examples of haiku, some written by Japanese haijin (haiku writers) and presented in translation, and some written by English-speaking writers. In this book I hope to inspire readers to write their own haiku while remaining open to the possibilities it provides for personal growth. The book is 110 pages long. It comes in paperback and also as an e-book.

The Way of Tanka is an approachable yet comprehensive examination of the Japanese form of poetry known as tanka. In it I discuss tanka’s roots in early Japanese courts where it was considered the poetry of lovers, as well as its adaptation to western culture and the characteristics that separate it from the more popular form of Japanese poetry, haiku. It is 144 pages long and comes in paperback as well as an e-book.

In Poetry That Heals, I take the reader on a journey through my long experience writing various forms of Japanese poetry, especially tanka and haiku and its related genres. I include poems from well-known historical and contemporary poets. Looking back in this book, I realize that my practice of poetry writing has moved me towards developing awareness, dispassionate interest, personal healing, as well as compassion. I have come to see that in creating poetry, I am creating myself. The book is 110 pages long and comes in paperback as well as an e-book.

In Canada you can get the books from your neighbourhood bookstore, who can order them via Ingram, or buy them directly and quicker from mail@pagesresort.com. They are $20 each, or $50 if you are getting the complete set.

For the USA and other countries the books can also be ordered through your neighbourhood bookstore, or directly from info@shantiarts.com

The Uses of Tanka

In Heian times,
tanka were sweet confirmations
between courtier lovers
of deeds done and to be done.
And also of court rapists,
for dark chambers and
many-layers of kimono
hid identities, so seducers
were never quite sure that
they had entered the right woman.
Even in such cases of mistake,
the next morning the maiden
would receive a token tanka
speaking of her long hair perhaps,
and other matters, and it would be
attached to the prescribed branch
from say a flowering cherry.
She, in return, whether mad with anger,
sulking, or perhaps with a small smile,
would be obliged to also write a tanka,
in response, commenting on the situation,
and send it along with maybe
a late blooming plum blossom.
A few years later both women,
whether seduced, or once loved,
might be found writing more acerbic tanka
complaining of neglect, or at least
that the dwelling he had provided
was not up to par.
Tanka-writing would also be called for
when noblemen, at time of banishment,
(maybe for a political misstep, or
for the seduction of the Emperor’s favourite)
thought sadly of the Capitol
they would be leaving for say
the beaches of Suma (always a good place
for writing mournful tanka of exile).
These days, I write tanka
when my haiku get uppity
with the conceit that they have
nailed the moment to the page.
I slap them with two extra lines,
reminding them that all things pass,
particularly the “here and now”
and even if things don’t pass
as quickly as we would like,
it’s all illusory anyway.
Yes, tanka are useful for times
such as these. 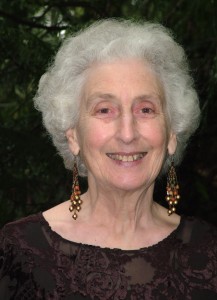 Naomi Beth Wakan is a poet and personal essayist. She has written over thirty books including the ALA selection, “Haiku – one breath poetry. Her recent titles from Wolsak and Wynn include “Late Bloomer – on writing later in life,” and “Book Ends – a year between the covers”. Her essays and poetry have appeared in many magazines including Geist, Room, Resurgence and Gusts. She is a member of the League of Canadian Poets, Tanka Canada and Haiku Canada. She lives on Gabriola Island with her husband, the sculptor, Elias Wakan. www.naomiwakan.com

Everyone has something they do
when there is nothing else
that can be done – some knit,
some jog, some pour
alcohol down their throats,
and then…
some choose to do the laundry.

The summer of our separation
I washed white trousers,
white socks, white shirts,
white shorts, as if my marrage
depended on their whiteness.
So when I heard of the woman,
living in the Gaza strip,
going to the pump for water and
searching for bits of soap
to keep the girls’ dresses white,
I recognised a sister straightway.
For though we are oceans apart,
that summer we could have been
standing side by side pumping
water together to keep our
children’s clothes white;
not knowing, in our desperation,
what other action could be taken.

Ariadne wrote: Naomi read to this poem on the World Poetry Cafe Radio on March 15th and I asked permission to print it here. I really like it!

How to write a haiku

on the earth beside the rose bush,
I do not know from which tree
they have fallen
so I write down “red leaves.”
And as I set the vase
and the leaves on the table,
I write down

rose just cut
beside the vase
two red leaves
And although I do not know
the details of what I have just done,
the sadness of it all
cracks my heart open.

New Book just out!
Sex After 70 and Other Poems contains new and selected poems from Naomi Beth Wakan’s output over the last 14 years (1996-2010). Her poetry, while down-home and familiar, presents fresh angles on the topics of relationships, writing, cosmology and the arts. Her directness and conversational tone are disarming.

Naomi Beth Wakan’s poetry sharpens the senses, stimulates the intellect and opens the heart. Her poems are simple and easy to understand, but they have depth and bear reading over and over again. Naomi allows us to become attuned to the potentiality of each moment, the joy in the savoured moment, the sadness of loss as that moment must inevitably be let go.”
Sonja Arntzen
Professor Emeritus, East Asian Studies, University of Toronto.
The book is obtainable from book stores, online and from at naomi@naomiwakan.com