The World Poetry Café Radio Show, March 16, 1- 2 PM PST, on CFRO 100.5 FM, welcomed the talented and lovely poetess Mamta  Agarwal calling from India with her beautiful poems in a diverse and unique show. After four years, it was a great honour to talk to her and hear her wonderful poetry once again. https://worldpoetry.ca/?p=9088

Also included was the excerpt of a play by our super technician Victor Schwartzman, who left the radio listeners  breathless during a dramatic section of the play “Listen to Me”. It is being published  in the near future at: https://www.redfez.net

Celebrating St. Patrick’s Day was co-host Neall Ryon with a series of limericks by Bryon.

A very special e-poem Eternity. This is a poem inspired by the passing of time and memory (C)   by  Jason Endfield, (www.jasonendfield.com) from the UK was full of sensitivity and grace .  We hope to hear more  from this talented poet in the future. 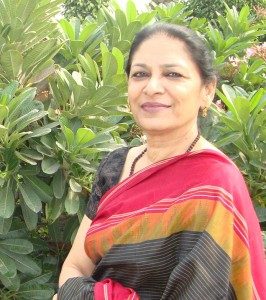 We earnestly pray for rain

Drained after a long unforgiving summer.

Or a drink made of khus, almonds and melon seeds

And spiced with crushed cumin

I glance at the sky

And sigh in dismay

As I watch clouds gather

I can smell rain in

Some far off hills,

My eyes rest on woody bougainvillea;

And fence lines of neighbourhood villas

In colours as varied as a child’s first

As I take a swig from

My bottle of Kinley,

Am filled with wonder,

How they remain so buoyant

All day and by night,

From drought and heat.

While the Sun furiously beats

Down on earth’s cracked crust?

But mother nurtures the roots,

Who knows how she replenishes itself…?

The thorny vine knows not sloth,

And withstands the fiery wrath

And burst forth in blossoms,

Oft I wonder, some flowers

See what a plethora

Of colour, size and aura!

How amazing, they parlance

I was feeling hot.

Ariadne’s notes: An enchanting afternoon with a dragon, Zeus  and the Monkey King invited and presented by the talented poet Elaine Woo. The World Poetry Team of Ariadne Sawyer, host and producer, co-host Neall Ryon, super engineer Victor Schwartzman  and special volunteer Sharon Rowe welcomed her on the World Poetry Café Radio Show, 100.5 FM from 1-2 pm PST. Featured with a moving  e-poem about a young boy from Aleppo was Robert W. McGregor  and two poems from Kevin Morris from England. A tribute to Nadine Sims by Sharon Rowe was also included and will be read at Nadine’s Celebration of Life. 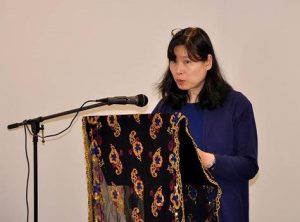 Elaine Woo is the author of the poetry collection, Cycling with the Dragon, Nightwood Editions, 2014.  Her work is featured in journals in Canada, the US, the U.K., France, and Hong Kong.  A new manuscript is currently in progress about human foibles, featuring bumbling mortals, including herself, the Classical Greek gods, and the Monkey King of Chinese mythology in fictitious exploits. To order her book, Cycling with the Dragon, go to http://www.nightwoodeditions.com/?page_id=842

This poem is from her upcoming  book:

“Precariously oof loping oof, an oyster oof coating intruding nuggets of conscience, oof the Monkey King scuffed, rippled, scraped, scratched his rough chest and crown; under arched eyebrows of dust, oof to bring order his kingdom in a cave. Why vacillate so much between resentment and hatred?

Sure, Sister-Monkey hid his stash of armor for 20 years with one of the Sea Kings. Oof-oof-oof. Okay, so she selfishly and arrogantly prevented him from invading a neighbouring mountain. He deserved pearls of respect not this goading reminder. He should demote her to cave janitor.
Oof-oof-ooooooful
Through Monkey ’s slow combustion, the haze of memory emerged: an intruder threatened their kingdom, Mountain Garden of the Waterfall Cave. His habit of feeding the shark of disdain with bloody morsels, meant he didn’t bother his sister with news of the incoming invasion. She suffered owwwf gross injuries.

Beneath his fingernails, blood burst forth where he dug the hardest owwwwwh….
Upsetting his teacup, he stretched his occasionally 6-foot forearm to pluck his mobile phone from its reclining spot by the chopping board. Dialing, he realized he needed her was sucked by an undertow of gratitude.

This time memory kicked his butt: when stricken with the overreach of greed, and avarice, she bowed low offered him solace of a hundred fanning female monkeys to cool his red ember brow.”