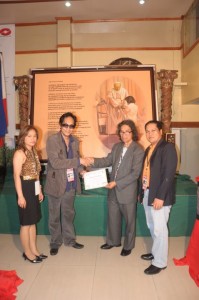 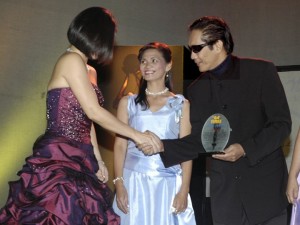 Doc PenPen, writer and director of “Takipsilim,” an award-winning indie docu-film that tackled the sinister side of human existence and the inescapable eventuality of death.

He is also the man behind the successful ”i” INSPIRE THE WORLD FRIENDSHIP POETRY EVENT  in the Philippines on April 10, 2011.
Doc PenPen’s upcoming book will contain a collection of  hundred poems, all delicious morsels of his personal beliefs and convictions. Some of them forage into the human psyche, the realm where he hopes to unravel the inconvenient truths about man’s inhumanity. Other poems philosophize on a range of human emotions based on his perception of truths. His chosen advocacy is no leisurely walk in a park. Keeping chaos at bay, he constantly crosses swords with the demons of ridicule and rebuff. Through all the difficulties, Doc PenPen remains resolute in his commitment, ready to stand up for something but willing to sit down for everything.

Doc PenPen found a solid ally in Manny Calpito, who too believes in the primacy of humanity over and above man-made rules and regulations. Manny Calpito, a veteran and multi-awarded broadcaster in the Philippines and the USA, is the man behind “Operation Tulong”, a radio program that earned him the Catholic Mass Media Award, the 1981 Grand Award for The Most Outstanding Public Service Program given by Pope John Paul II, and a membership at the Radio Hall Of Fame.  Mr. Calpito, an author himself, was challenged by Doc Penpen’s film and poems, thus made ”PENTASI B” a history, generic name for all kinds of visual poetry, finding them mystifying in style but lucid in substance, disorganized in structure but tidy in essence, and seemingly incomprehensible in form but robustly rational in message.

Incidentally, on Aug. 28, 2011, Doc PenPen was awarded “The Father of Philippine Visual Poetry” in a fitting ceremony held at the grand ballroom of Cloud Nine, a classy boutique hotel perched on a hill in Antipolo. The Final Awarding Ceremony will take place in Glendale, California in May through the untiring efforts and supports of Manny Calpito and Marvin U. Mangabat.

The man in the mask has a face at last! The award has further ignited Doc PenPen’s commitment to do “Bukang Liwayway” and to release his book of visual poetry before the year ends. Verily, his rendezvous with destiny and appointment with history can no longer be postponed, much less canceled.

Ariadne’s note: He will be launching his new book at the Second  World Poetry 2nd Interantional and Canada International Peace Festival May 25, 26 in Richmond, B.C. 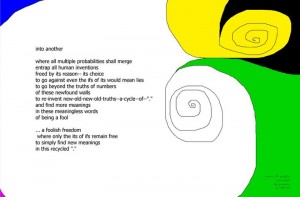