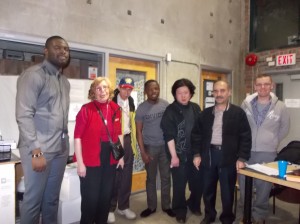 The World Poetry Café with hosts Ariadne Sawyer, Vivian Davidson and Israel Moto welcomed Yoshifumi Sakura, a talented poet, musician and composer. Also welcomed back were our two festival hosts from Ghana Michael Kwaku Kesse Somuah and Kwame Yirenkyi and others . PLEASE CLICK HERE TO LISTEN TO THE SHOW.

The World Poetry Café Radio Show needs your help! We are fundraising for the show and need to raise $1,000 per year to keep on the air. If you can become a member of the World Poetry Café, please go to www.coopradio.org and click on membership. Put in the name of the World Poetry Café and your membership will go in our account. As a member, you get three interviews on the radio and a featured poet spot on the www.worldpoetry.ca You will also receive a tax receipt.  Help us to keep the show on the air! We need $1,000 per year to keep our multilingual voices on the show.

Afghan film: The Broken Destiny of Poetry by Rahmat Haidari and Sajia Hussain (documentary on a young Afghan woman poet and her struggles to survive and write) trailer:  http://www.youtube.com/watch?v=T0FPPddB6UY 20 minutes, English subtitles.

Presentation of  Empowered Award to the well known correspondent Atia Abawi  to her brother and fiancée who are flying in to receive it.

Join the World Poetry Peace Poetathon official launch as it flows around the world bringing a focus on peace with supportive peace connector partners.

Be sure and visit our amazing displays and those of our partners, get a free gift poem and look at the peace posters of Sattar.

Ariadne’s Notes: World Poetry is pleased to share with you another nominee for World Poetry Empowered Emerging Filmmaker at the World Poetry Canada International Third Peace Festival 2013 at UBC and other events. 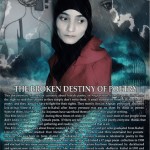 The documentary is The Broken Voices of Poetry, a dramatic story of a young girl who got into trouble trying to express her thoughts and feelings in poems. The young poet’s work forced her to leave her hometown and she is now living in a small house in Kabul, far from her family and friends. There has been good feedback on the film. 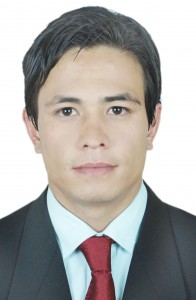 “I am Rahmatullah Haidari and I was born in 1989 in Kabul, Afghanistan. I finished school in 2007 in Kabul. Due to my interest in media, I started working in Arezo TV, Kabul branch in 2006 as an editor. Afterwards, I started working in Ariana TV in news video edit department, in the meantime I was also working with the Roman Film production as cameraman and film maker.

In 2009, due to 1TV’s request, I left Ariana TV and joined 1TV to work with them as head of news and political program’s editor and I currently have the same responsibility.

I am also working and cooperating with different film production companies who are working on TV commercials and short films and documentaries and I have received many letters of appreciation .

I am working also in Apple media production as deputy manager and film maker and I have directed a film with the help of this production and have sent the trailer to poetry film festival in Canada 2013.

I am really happy to be invited to this valuable film festival. The goal behind producing this film is to show the problems female poets face in this traditional society of Afghanistan. In the film I am showing the story of a young girl who got into much trouble for trying to express her thoughts and feelings in poems. This young poet’s works forced her to leave her hometown and she is now living in a small house in Kabul, far from her family and friends.

In addition to this I have many other subjects and ideas about freedom of speech, democracy elements, peace and other hot issues in Afghanistan. These ideas can be used and worked on as conferences meetings and film festivals and they can really be effective.

I believe in order to reflect these common cultural points, introducing Afghan culture to the world and introducing other country’s cultures to Afghanistan, will have a bold effect on documentaries and reports produced here in Afghanistan. Therefore I want to be a part of this and to have a role in maximizing the level of people’s knowledge, reflecting their problems, cultural exchange and establishing connections.