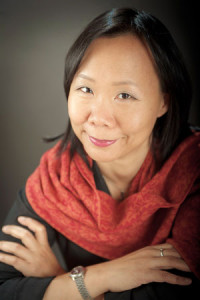 Fiona Tinwei Lam is the Scottish-born Vancouver-based author of two
books of poetry, Intimate Distances (finalist for the City of Vancouver Book Prize) and Enter the Chrysanthemum. Her work has been chosen twice for BC’s Poetry in Transit program. Her poetry, nonfiction and fiction have been included in over twenty anthologies. She is a co-editor of and contributor to the non-fiction anthology, Double Lives: Writing and Motherhood (McGill-Queen’s, 2008), as well as the editor of The Bright Well, a collection of contemporary Canadian poems about facing cancer (Leaf Press, 2011). Her new children’s book, The Rainbow Rocket, was published last month by Oolichan Books. www.fionalam.net 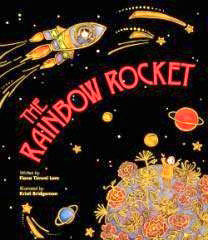 The Rainbow Rocket takes James on a marvelous and magical dream journey to visit his beloved grandmother, whose beautiful paintings and loving guidance have inspired his own creativity. Celebrating the Chinese holiday of Ching Ming, James finds a meaningful way to honour their bond of love and his grandmother’s rich legacy of art. In The Rainbow Rocket, the heart and the imagination work together to transcend loss. The Rainbow Rocket celebrates intergenerational bonds, the importance of ritual, and the vital significance of the arts in affirming human connection

“Author Fiona Lam and artist Kristi Bridgeman bring inspired contributions to this sensitive, highly recommended book for all ages. Simple yet profound, The Rainbow Rocket touches such charged topics as death, loss and dementia with gentleness, honesty and endless heart. A remarkable achievement; a high-priority book for all who love life and value the journey.”

“A touching and beautiful story of love, loss and the imagination, told with sensitivity and grace.” Dennis Foon

“The themes of love, memory, loss and renewal are sensitively rendered in this poignant story and will resonate with readers of all ages.” Judy Fong Bates

Loretta Seto is a fiction- and screenwriter, as well as playwright,who has been published in RicePaper magazine and the anthology Strike the Wok. Her story from that anthology, titled “Versus,” was selected for production and broadcast on CBC Radio as part of the program Between the Covers. She has also had two short films “Once a Fish” and “Ripples” produced with funding from Citytv. She wrote and produced a solo performance piece “Why Weight?” for the 2011 Vancouver International Fringe Festival, and a second production of the play was also included in the Brink Festival 2012. Her first children’s book Mooncakes was released in the spring of 2013 and has received positive reviews from publications such as The Quill & Quire, The Kirkus Review, and Booklist. Loretta earned her MFA in Creative Writing at UBC and is excited by the new challenges she faces writing in different genres. She lives in Vancouver, Canada. www.lorettaseto.com 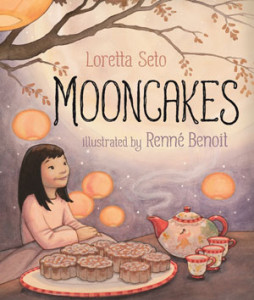 Mooncakes is the lyrical story of a young girl who shares the special celebration of the Chinese Moon Festival with her parents. As they eat mooncakes, drink tea and watch the night sky together, Mama and Baba tell ancient tales of a magical tree that can never be cut down , the Jade Rabbit who came to live on the moon and one brave woman’s journey to eternal life. With a gentle focus on the importance of family, Mooncakes is a perfect book for parent and child to read together, while its educational aspect makes it ideal for school libraries that wish to provide an insight into a unique cultural holiday.

“The ancient stories feature rich vocabulary and intriguing images. Decorated with a scroll design and appearing in italics, the three tales also look ornate on the pages of the book. The young girl’s responses to the stories are reflective and full of wonder…Benoit’s watercolour, coloured pencil and gouache illustrations present a warm, loving family sharing traditions…This is a wonderful book to introduce cultures and holidays. Highly Recommended.”

“A lovely, touching story that functions well as both entertainment and an introduction to a snippet of Chinese culture…Seto seamlessly blends the contemporary storyline with the traditional narratives…Benoit’s moody palette of muted greys, blues, greens, and oranges evokes the nighttime setting, giving way to unexpected pops of brighter colour when the narrative switches to folktales…A treat as sweet as the titular pastry.”

Beautifully illustrated by: Renné Benoit. She has been drawing pictures since she could hold a crayon. She works out of her home studio in St. Thomas, Ontario, where she lives with her husband, their daughter and their dog. Her recent work includes Goodbye to Griffith Street, which won the Christie-Harris Illustrated Children’s Literature Prize in 2005. Some of her favorite things are thunderstorms, fireflies, practical jokes, and the first snow. You can visit her website at www.rennebenoit.ca.