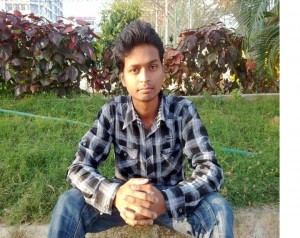 Samarendra Patra, aged 19 is a second year student of B.Tech-Mechanical Engineering in the prestigious SRM UNIVERSITY, Chennai-INDIA. He was brought up in a small township of NALCO named Damanjodi means “Paharon ka Sangam-the unification of the hills”. Reading and writing poetry has always been his passion. Basically, the ambition of the author is to become an entrepreneur. His sensitivity to the surroundings have thrived him as a poet.-He has written more than 200 poems in three languages-English, hindi and oriya. He was featured as the guest poet on ALAN GILBERT’S BLOG- “ALL THAT RHYMES”. Alan gilbert- Alan Gilbert (born February 23, 1967) is an American violinist, currently the Music Director of the New York Philharmonic).He is also featured on the website of Gina Mcknight-popular Author and Freelance Writer-USA.He was also invited to join IFLAC- THE INTERNATIONAL FORUM FOR THE LITERATURE AND CULTURE OF PEACE by IFLAC’s Founding President – Dr. Ada Aharoni .His three poems will be getting featured in an upcoming anthology of ‘SILVER BOW’ ,a Canadian publisher. His second book of poetry-‘My transition-A silent voyage’ will be releasing in the year 2012.He has got his poetry in many local and national dailies. His poetry is being read by the people belonging to all parts of the globe. “Samarendra Patra is a highly gifted and talented poet” says, Dr.Karunesh Aggrawal-Managing editor (CYBERWIT.NET). “Samarendra is the poet-patriot hotly loving the Native Land and ready to battle for India as Invincible Empire Spirit. Degenerative «Western culture» and «poetic postmodernism» of the Indian intelligentsia haven’t poisoned original verses of the young poet. Samarendra take one’s bearings mainly on Sacred Vedic and classical archetypes of the IndianPoetry.”says, Azsacra Zarathustra-Russian esoteric philosopher and poet.“His poems touch the inner chords of the readers” says,Liliana Negoi(Romania)- Author,poet -“Sands and shadows”, “Footsteps on sand – tanka collection”

His first book-“MY MUSINGS-The poetry within” was released from Rochak Publishing (Allahabad) in june-18, 2011. 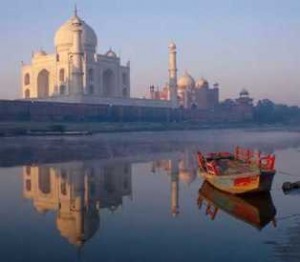 Ariadne wrote: The following poem was sent to me with the following request. It will be read on the World poetry Cafe Radio Show as an e-poem November 8th at 9:30 pm PST or live on www.coopradio.org
He writes:”I have writen a poem -‘The threshold love’ to awaken my countrymen to stop spoiling the river Yamuna as it’s declining water level will result in the breaking down of’ TAJ MAHAL’-one of seven wonders of the world.Can you please help me by featuring this poem on your website or your newsletter so that it reaches the ears of million people? “
Samarendra Patra

While, flipping through the pages of history,
Gracefully my eyes on an ancient Love memory.
The memory drifted me aback to a king and queen,
Their indomitable love to colossus space did preen.
King-Shah Jahan, young successor to mughal throne,
The wheeling time spilled him on every architectural stone.
For his lovable empress Mumtaz Mahal’s last dream,
The Taj-Mahal’s amber beauty bestowed gleam.
Milky tomb in the banks of Yamuna River,
Breathed pearly on the reflections shiver.
Today, the splendor national heritage,
A top wonderer to the world’s gaze.

Ah! The man’s charcoal dipped deeds,
Yamuna, turning hollow as it brutally breeds.
River-the base for tall tomb’s stand,
Fading slowly to a barren land.
Smokes of agony fountain onto the sky,
As her pious soul chokes in piteous cry.

Oh my countrymen!
We-the only savior to callous man’s greed,
Nor any heaven’s angel to pay heed!
Let our veins be clean as spotless dove,
To sparkle love for the threshold love. 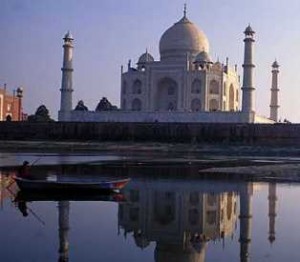 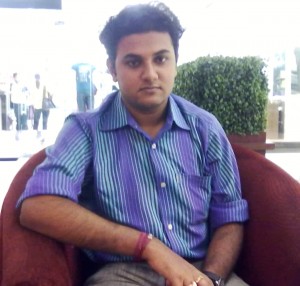 Sonnet Mondal is a renowned young poet, writer and an innovative sonneteer.He has authored five collections of poetry and has been widely published and read all over the world.He was bestowed with honors such as Poet Laureate from Bombadil, Sweden, Doctor of Literature from United Writers’ Association, Secretary General’s honor and appointment from Poetas Del Mundo and many others.His latest books include Penumbra of Indian Verses and 21 Lines Fusion Sonnets of 21st Century which introduces a new genre of 21 Lines Sonnet. He is also the youngest Indian to be invited at the prestigious Struga Poetry Festival, Macedonia to represent India in their Golden Jubilee celebrations, which has been cited as an effort to increase the cultural cooperation between the two countries by the SPE authorities.Sonnet is the first Indian to bag The AZsacra International Poetry award 2011 sponsored from Russia and given each year to three best poets from round the globe through the Taj Mahal Review Journal.He was featured as one of the famous five among Bengali youths by India Today in 2010 and as an achiever by the Herald of India.His upcoming books include a novel in verse and the second part of 21 Lines Fusion Sonnets.He is the Founder of United Minds for Peace Society, The Enchanting Verses International, The Bombadil Review and the Musical Oasis for Resurrection. Dr. Sonnet Mondal www.sonnetmondal.co.cc

Charcoal burns without flames-
Red heat in the snowy night
Massages stiffened muscles.
A squirrel cracks walnuts of love.
Couples cover up spaces around the bonfire.
Place for one left…
I stand thinking to share it
With the squirrel.
Love has dimensions
Walnuts too.

Why do my heart-beats
Force me:
To place scissors, knives
Upon my naked neck;
To feel
The clotting of blood
Or a flow through capillaries;
Silent in fear of
The cold metallic touch.
Boiling fluids turn icy
The joining bridge of
Life and death
Sways in senescence.

You wait for me to open
Like a new banana leaf,
Or, as petals of a marigold
In dry winters…

You wait for the third eye
To arise and see,
Apart from walking and talking
Crowds, caring relatives
Paying jobs…

Give me water. I will bloom
Into sun
To be for the green and greenery,
For beings that need my warmth
More than you.

Sonnet will be the featured e-poet on the World Poetry Cafe Radio Show on March 22nd.