Ariadne’s Notes: We want to welcome Andrés Julián Badillo, a poet and a caricaturist whose work will be on display in the glassed in cases at the  University of British Columbia, Simon K. Barber Learning Centre during the World Poetry Canada International Peace Festival, October 6-27th. Here are two famous poets from the past, Dylan Thomas and Pablo Neruda along with commentaries by him. 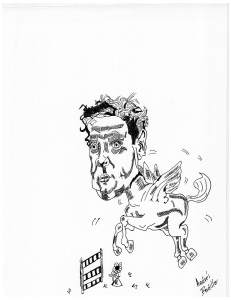 Commentary to Dylan Thomas caricature
“Dylan Thomas was a great poet. I got to know about him, thanks to Charles Bukowski´s tale That is what killed Dylan Thomas, which describes the world of fame around the life of a successful poet. Then I asked myself, can really crowds and cameras kill a poet? I don’t know about that, at least they can kill his poetry. To Bukowski, Dylan Thomas was not prepared for success, in his case, the gods made him strong enough to receive the  applause.” 150 anniversary of Dylan Thomas. 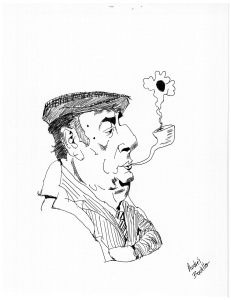 Commentary to Pablo Neruda caricature
“To Gabriel Garcia Marquez, Colombian writer, lover and reader of poetry, Neruda was the greatest poet of the XX century. To me that is great, but I prefer to read to another Chilean poet, Nicanor Parra. They say that Neruda had over the entrance of his house, today a Museum, an open cage, without birds, poetry turned into life, just for that, he deserves to be a genius.” 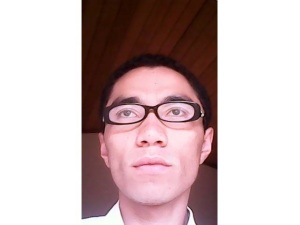 Andrés Julián Badillo was born in Tunja, Boyacá, Colombia.  He is a 26 year old poet and caricaturist.  He has a degree on philosophy, his thesis, The concept of Death on Heidegger´s  Being and Time, got the highest note. He has written 6 books of poetry, some of them: The women who tempted Eve, The man that used to be a shadow and The obstinacy of the golden antelopes. All his  poetry work is still unpublished. As a drawer, he has created a collection of 65 portraits of poets from all over the world. This collection is called Tears of Swan, with it, he makes a little rendition to the authors he likes the most, included the ones who have had a great influence over his work as a poet, which focused on the themes of love and death. His new book on Heidegger is on Amazon.com
http://www.amazon.in/Heidegger-muerte-Comentario-concepto-Tiempo/dp/3659032085

God is a woman, and I love her